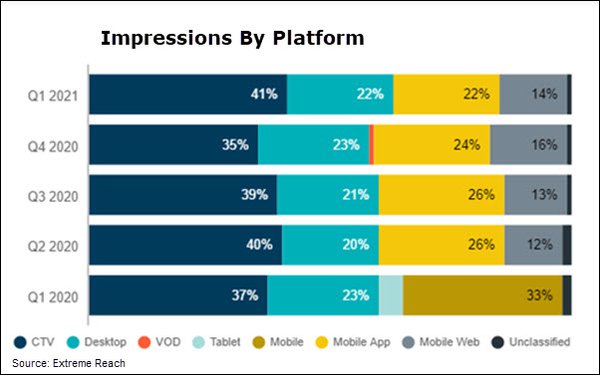 The share of impressions served to CTV rose from to 41% in first-quarter 2021 — up from 35% in Q4 2020, according to Extreme Reach’s Video Benchmarks Report for the latest quarter.

The report includes ad performance data for impressions served from its creative asset management AdBridge platform to CTV, desktop, and mobile devices. The data tracks campaigns for a diverse set of brands across multiple categories.

That was the highest percentage for premium publishers since Q2 2020, when they accounted for 65% share of impressions served.

For the first time, ER also reported how aggregator and premium publisher impressions break out by platform.

But among aggregators, CTV accounts for just 8% of impressions. Desktop leads with 36%, followed by mobile in-app at 33%, and mobile web at 23%.

Q1 also marked the most marked dominance to date for the 30-second ad format, with 88% of impressions delivered for the longer format versus just 12% for 15-second spots. 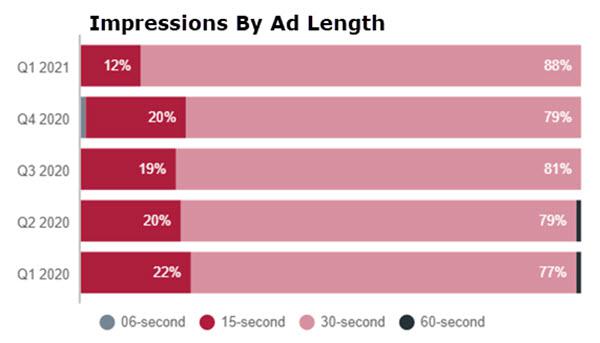 “The video ad landscape has been through an extended period of disruption over the last year, as well as significant growth,” notes Mary Vestewig, vice president, digital account management at ER. “Q1 saw advertisers leaning into the familiar, including the ever-popular 30-second ad length and a preference for premium publishers. As vaccination rates increase and life resumes a greater sense of normalcy, we’re watching Q2 trends with great interest.”