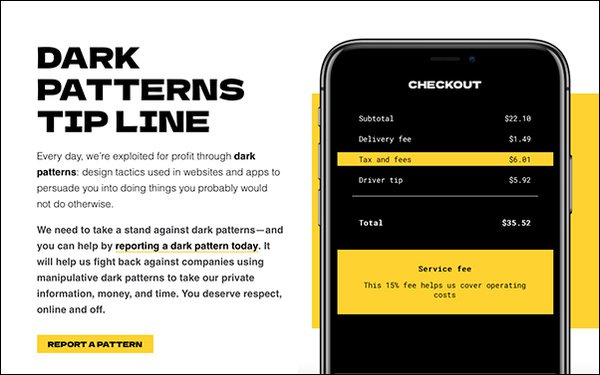 Consumer Reports has joined with a coalition of researchers and advocacy groups to launch a hub for consumers to submit dark pattern examples.

Dark patterns are defined as web design tricks companies use to confuse and take advantage of consumers—i.e., pop-ups with tiny X’s that make a window hard to close and subscriptions with hidden fees that a person can’t cancel without making a lengthy customer service call.

The tip line is designed to educate consumers and to create a repository of examples.

“So far, the conversation on dark patterns has been fueled by academics and researchers,” states Amira Dhalla, associate director of mobilization for CR, who serves on the Tip Line’s advisory board. “That’s great, but the actual perspective of everyday people is what’s missing.”

Consumers are asked for the name of the offending company and to describe the dark pattern and any harm they suffered. They are also asked for a screen shot. But they are urged to file a complaint with their state attorney general.

Germain writes that “dark patterns can often be found when you’re registering for a new account on a website, or checking out during online shopping — scenarios where consumers may be dealing with annoying extra steps and hoping to finish a task as soon as possible.”

The article continues that dark patterns “can also show up when you’re doing something that goes against a company’s business interests, such as unsubscribing or turning on stricter privacy settings. “