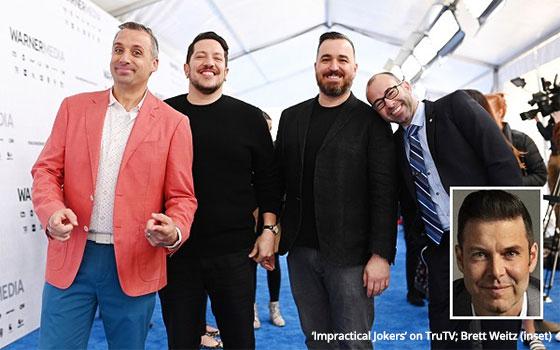 The manner in which some basic cable networks come to rely, seemingly, on just one or two shows to sustain themselves throughout the day has long fascinated the TV Blog.

One example that has been cited here more than once is TruTV’s steadfast reliance on “Impractical Jokers.” The show and the issue of how much TruTV relies on it was the main subject of at least two previous TV blogs (in January 2019 and November 2020).

Spoiler alert: It is the subject again of this TV Blog, but with a difference. This time, I had an opportunity to ask Brett Weitz about it during a telephone news conference held last Wednesday morning about an hour before WarnerMedia's virtual upfront.

That TV Blog noted that at the time of its publication, repeats of “Impractical Jokers” plus its repurposed spinoff, “Impractical Jokers: Inside Jokes,” represented just north of one-third -- 34% -- of TruTV’s daytime and prime-time schedule.

Today, “Impractical Jokers” and “Inside Jokes” accounts for 41% of Tru’s all-day schedule and a whopping 83% of its prime-time schedule, according to an audit I just conducted of the TruTV schedule for this week -- specifically, Monday, May 24 (yesterday) through this coming Sunday, May 30.

In the telephone news conference, I told Mr. Weitz, honestly, that I love “Impractical Jokers” as much as the next person. But I have formed the impression that, for all intents and purposes, the brand is pretty close to the only thing TruTV has going for it.

This perception had me wondering what purpose TruTV serves and by extension, how he and WarnerMedia view this seemingly single-minded TV network.

“Illuminate me,” I requested of him. “What is TruTV's role or purpose in television? What is its identity?”

To his credit, Weitz gave a thoughtful answer, which was -- paradoxically -- that no one should overthink the issue of TruTV's position in the cable business.

“TruTV’s role in television is to always be here for a good laugh,” he said. “Don’t overthink this. I beg of you.

“[TruTV] is there for you to sit back -- whether it be five minutes or five hours -- [and] enjoy ‘Impractical Jokers,’ ‘Fast Foodies,’ ‘Big Trick Energy’ [and] ‘Backyard Bar Wars,’ and to sit there and allow yourself to be entertained.” These other shows he mentioned, plus a few others, do take up the other, non-“Impractical Jokers” hours on the Tru schedule.

Weitz extended his "don't overthink it" advice to also include TBS and TNT. "When you think of TruTV, think of it as a destination that you can sit there for hours on end and laugh and be entertained and enjoy yourself," he said.