At Last, An Animated Comedy About Talking, Neurotic House Pets 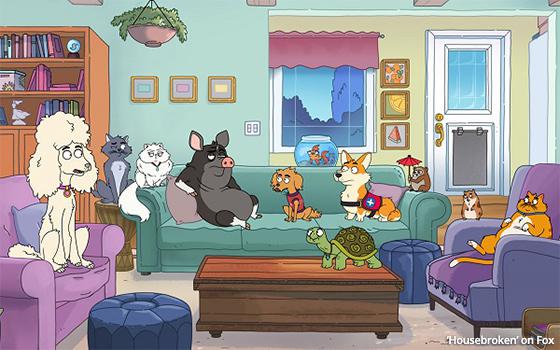 The inner lives of suburban animals, both domesticated and otherwise, are the focus of “Housebroken,” the latest animated comedy on Fox, and one produced by Bento Box Entertainment, an animated company that Fox owns (after purchasing it in 2019).

“Housebroken” is a talking-animal comedy that works for a couple of reasons. For one thing, these “animals” are cartoons -- which is the best medium for presenting something as fanciful as talking dogs, cats, a pot-bellied pig, an unspecified fish in a bowl, a turtle and at least one other creature not immediately identifiable.

Once in a very great while, a comedy will come along on TV featuring a “live-action” animal such as a chimp, an orangutan or a horse that speaks in a human voice, a concept that almost never works, except for “Mr. Ed,” a talking-horse comedy that was so exceptional that it has never again been attempted, much less equaled.

The other thing that works about “Housebroken” is the apparent close attention paid by the show's producers and writers (led by series co-creators and executive producers Clea DuVall, Gabrielle Allan and Jen Crittenden) to the behaviors of the show's animal characters.

Somehow, the makers of this show have managed to give their cartoon animals -- representing a variety of species and breeds -- behavioral characteristics that are “true” to their species, while at the same time imbuing them with human traits and reactions.

The best example is a large, lumbering dog named Chief (voiced by Nat Faxon) who talks in a human voice, but in all other respects behaves like the archetypal “dumb dog” who repeatedly and stupidly engages in behaviors that get him in trouble, such as getting too close to skunks or wasps.

If there is a lead character in “Housebroken,” it is a poodle named Honey (seen in the photo above, left). Voiced by Lisa Kudrow, Honey is the pet of a human psychotherapist (who, like other humans in the show, is rarely seen).

As such, Honey has apparently observed some of her mistress’ professional practices and, as a result, Honey convenes and leads regular therapy sessions with the other neighborhood animals (one of those sessions is pictured above). It is at these sessions that the animals' various personalities are defined and delineated.

Indeed, one of the recurring themes in the show is that these neighborhood pets have all taken on neuroses and insecurities that they have evidently picked up from their owners.

This is a smart -- and smartly written -- comedy enhanced significantly by the quality of its voice characterizations.

In addition to Faxon and Kudrow, other voices in “Housebroken” include Tony Hale of “Veep,” Will Forte of “The Last Man on Earth” and Jason Mantzoukas of “Brooklyn Nine-Nine.”

Bento Box is the animation company that already produces “Bob's Burgers,” “Duncanville” and “The Great White North” for Fox.

“Housebroken” premieres at 9 p.m. Eastern on Monday, May 31 -- Memorial Day -- where it will serve as a lead-in to “Duncanville,” debuting that night in a new timeslot.