Android Giveth As Apple Taketh Away: CPMs, That Is 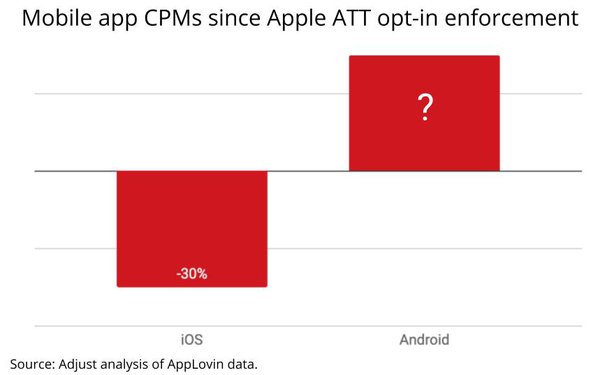 A month into Apple’s enforcement of its new App Tracking Transparency framework, the picture is getting clearer on its impact on consumers and advertisers alike. There are also some surprising unintended consequences, like a corresponding boost in Android app ad spending.

I’m not saying the smoke has exactly cleared. We are still getting wildly different data about consumer opt-in rates from a variety of different sources, utilizing different app publisher coverages. But the overall consensus is that it’s not nearly as dire as some had predicted, and is likely to get better over time. Unless you’re Facebook.

“Since the rollout a month ago, some articles have suggested that global consent rates from users could be as low as 5%,” writes app measurement and tracking firm Adjust CEO Paul Müller in his blog post this morning, citing data from AppLovin that shows the reality “appears to be much more optimistic.”

While consent rates vary widely -- ranging from a low of about 27% to a high of 75%, depending on the app -- average rates are trending well above the early predictions.

“Our theory regarding the broad range represented is that early reports were taking overall numbers (from apps that asked for consent as well as those that didn’t ask for consent because they haven’t added the flow or don’t plan to) instead of only focusing on apps that explicitly request consent,” writes Adjust’s Müller, who predicts opt-in rates will actually rise over time.

Meanwhile, the impact on the mobile app advertising marketplace also appears to have been greatly exaggerated.

While some had projected a “50% decay to ad revenues” as consumers opted out of being tracked, Adjust’s Müller says the reality has been about a 30% drop in CPMs (not advertising volume), so iOS app advertisers appear to be getting a better deal in the short run, even if publishers are feeling an iOS pinch.

That said, Müller notes there has been a corresponding increase in Android CPMs, so if those publishers are operating on both operating systems, things should be balancing out as mobile marketers shift value between platforms -- but not out of the medium altogether.