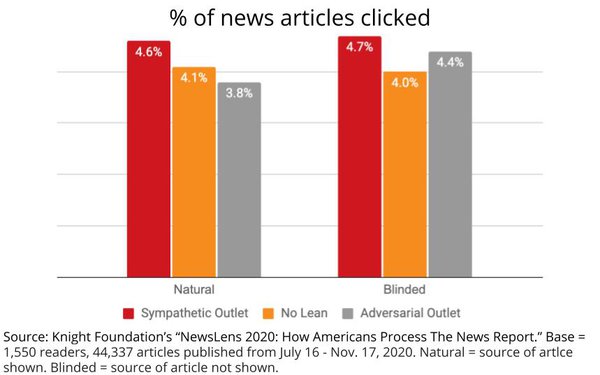 There's some fascinating new research from the Knight Foundation suggesting that the confirmation biases of American news consumers may have more to do with their perceptions than the reality of the sources they read.

The research is based on a control study that measured differences in the way Americans read -- and shared -- news articles based on whether they were shown the publishing source or whether that was blind to them. What it found was that when they didn't know the source, they were far more likely to click on and/or share articles from what they would otherwise consider "adversarial" news outlets.

"As expected, partisan readers clicked on more articles from sources mirroring their politics," the report notes, adding: "This tendency persisted whether the source cue was shown or hidden but was more pronounced when readers could see which outlet produced the content, suggesting individuals’ awareness of who publishes an article contributes to partisan selective exposure but does not fully account for it. Users also appeared to gravitate toward headlines and images that confirmed their views even when they did not see a source cue."

I'm still going through and processing some of the report's findings, but my initial takeaway is that when it comes to confirmation bias, the brands of news outlets matter as much as -- if not more than -- the substance of their product.

Or as Knight puts it: "An outlet’s brand plays an outsized role in determining how credible it is to readers. Readers tended to rate stories as higher-quality if they knew the brand name and saw it as credible, versus when they didn’t know the brand." 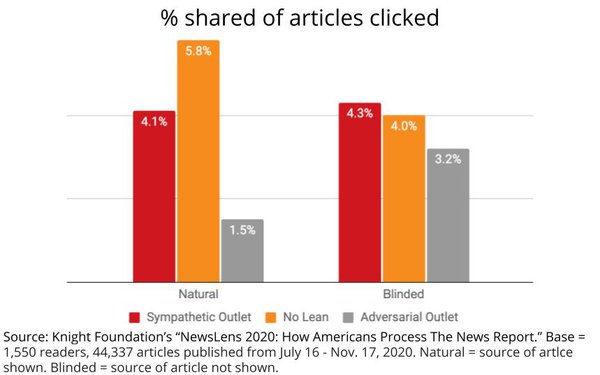 brand image, cmmr, news, publishing, research
1 comment about "It's The News Brand, Not Its Content, Stupid".
Check to receive email when comments are posted.
Next story loading