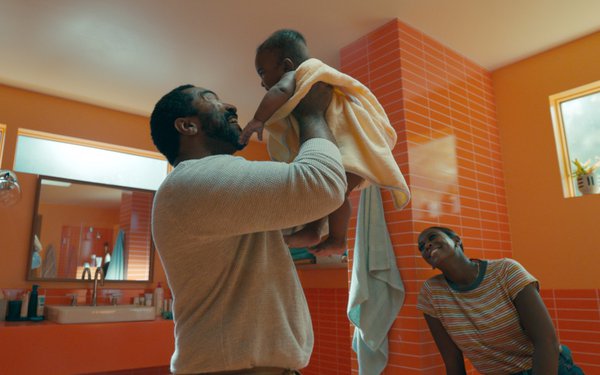 A few weeks after releasing some of its most revved-up sales results ever, Target just launched a new ad campaign. The effort is called “What we value most shouldn’t cost more,” and it’s the first from Cara Sylvester, its new chief marketing officer.

At first, the ad seems like a simple evolution from the long-term “Expect More. Pay Less.” campaign. But instead of super-peppy visuals of Target’s merchandise and high-energy music, the new work is calmer and sweeter. The merchandise is less in focus than the people using it: happy to be exercising, happy to be enjoying family get-togethers, happy cuddling babies.

In a blog introducing the ads, Sylvester says the idea is “to show guests that the things they value—from community support to affordable and healthy choices—are within reach when they shop at Target.”

The first version highlights trust and shows “where we stand,” as well as showcasing products from All in Motion athletic gear, private-label food line Good & Gather, and Black Girl Sunscreen, a Black-owned beauty brand.

The new ads are “very Target,” says Wendy Liebmann, CEO and chief shopper at WSL Strategic Retail. The decision to talk more about Target’s values as much as what it sells “is very much the way retailers should be talking about themselves as we exit the pandemic.”

WSL's research finds that shoppers, particularly younger ones, “are increasingly concerned about how and where they spend their money. They want to know they are shopping at a company that stands for something and share their values.”

Ongoing "How America Shops" research from WSL shows Target shoppers are especially interested in these values. “And because they felt that Target was very much there for them in the pandemic, making it easy for them to get what they need, they’ll give it plenty of permission to change the tone of its ads,” says Liebmann.

She says Target’s new work is similar to Walmart’s latest advertising, focusing more on the ways it frees people to spend more time doing what’s important to them, and less on its “Everyday low price” positioning.

“We’ll see more of this change in the emotional tenor of ads, as companies address consumers’ new way of looking at things. They want companies to stand for something. And they want to know what that is.”

The first Target spot, which broke on the season finale of NBC's “This is Us,” is scheduled to begin airing more broadly later this month, in video, social, print and out-of-home. Video is set to run in 30-, 15- and six-second versions in both Spanish and English.

A few weeks back, the company announced that its first-quarter results shattered forecasts. Total revenue shot up 23% to $24.2 billion, which marked the fourth consecutive quarter of 20%-plus sales gains. Comparable sales at stores jumped 18%, while digital sales increased 50%. And it says it gained more than $1 billion in market share.