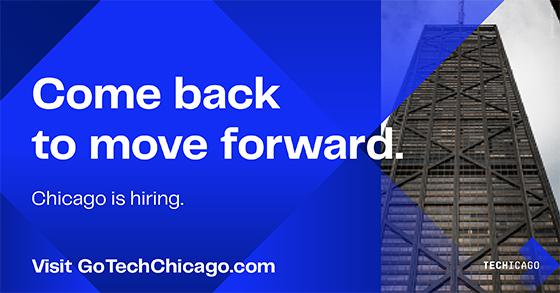 P33 a nonprofit focused on promoting the Chicago area as a major tech and innovation hub is launching its new ‘Come Back To Move Forward’ campaign. In partnership with World Business Chicago and local tech employers, the aim is to recruit 10,000 tech professionals to the region over the next two years.

The broader recruitment initiative aims to connect mid-career, “cream of the crop” tech talent by providing visibility and access to networking and lucrative job opportunities at Chicago’s most innovative startups and corporations.  Participants include tech giants like Google and Microsoft, Chicago Fortune 500 companies such as Allstate and Motorola, as well as the emerging tech companies including Amount, M1 Finance and Oak Street Health.

P33 is working with several agencies on the campaign including Independent creative agency 50,000feet which is handling creative duties and performance marketing agency Rise Interactive which has been tapped for media chores.

Edelman is working on the PR aspects of the effort and Human Predictions is devising a targeted email marketing and recruiting program. Hunt Club is providing additional recruiting support.

The main idea is to connect with tech professionals across the country—particularly those that might have ties to the Chicago region—and communicate the opportunities of starting and building their careers in the Chicago area.