The Downside Of The Upside 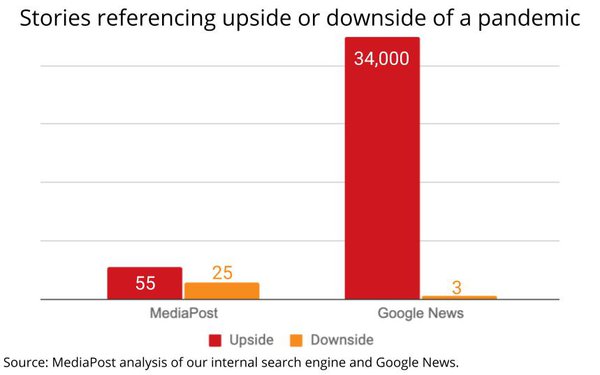 It's been a while since I've written something truly upside down. So today, as we head into the first unofficial weekend of a summer that looks to be decidedly more normal than the one we had last year, I'd like to write about something downside up. Also, because we won't publish anything Monday, I figured I'd post an "RTBlog" as a bonus for readers today.

Let me begin by acknowledging that journalists -- especially this one -- love a good cliche. And sometimes we overuse them. But it's not necessarily because we are lazy. Sometimes, a cliche simply is the best archetype we have for expressing an idea. But that's the upside. The potentially dark downside is that the more people see them, the more preconditioned people are to accept them as the norm, even when it involves a pandemic.

I was struck by that this week when I read the headline on one of my colleague's stories, an article by Tanya Gazdik about a new "Bring Back Lockdown" PSA created by Ogilvy. The campaign for Change The Ref pointed out that school shootings went down (no surprise) during the pandemic, and Tanya's headline ironically pointed out the "upside" of it.

It was the 55th article MediaPost published over the past year describing the upside of a pandemic, and one of three that explicitly used it in its headline.

So it got me thinking. How many others focused on -- to use another cliche -- the "glass half full" aspect of the past year? A Google News query found about 34,000 articles referencing it. On the downside, only three were indexed on Google News, although MediaPost published 25 making note of the pandemic's downside.

Now if you're beginning to think I wrote this while in The Upside Down (stranger things have happened), the truth is I'm just always soul-searching for a balanced perspective in our coverage, and I also recently received a flurry of press pitches talking about various new upsides being revealed about the pandemic, including the fact that carbon emissions went down dramatically, and they're beginning to bounce back up once again -- along with mass shootings, traffic, and other negative behaviors that took a one-year hiatus.

One of my favorite recent upside pitches came from Oracle's data team this week, which passed along a study finding 86% of Americans believe their personality changed -- for the better -- during the pandemic.

The report, based on a survey of 2,000 U.S. adults was fielded April 7-9, and also found something that, if true, should have some bearing on media and marketing pros: 70% of Americans said they read more (and learned more) during the pandemic.

The big question, of course, is how much and how quickly, we will revert back to old, downside ways of doing things, and evidence of rising carbon emissions, mass shootings, traffic, etc., certainly seems to suggest that for some things, it won't take very long.

From an industry point of view, I have to wonder how much other "upsides" -- like the acceleration of "digital transformation," the push for inclusion and diversity, the willingness of brands to take highly public stands on politically risky, but socially worthy positions and causes -- and especially, the shift toward "empathy," compassion and ethics -- will be sustainable.

Only time will tell. But I hope it doesn't take another pandemic for us to discover the upside once again.

covid-19, research
4 comments about "The Downside Of The Upside".
Check to receive email when comments are posted.
Read more comments >
Next story loading