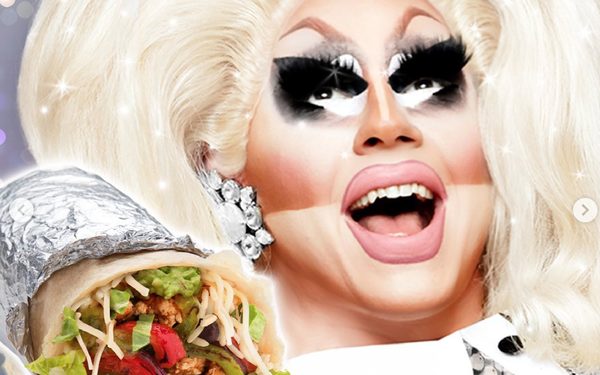 Love drag queens and want to spice up your lunch order? If so, Chipotle has your number and is introducing its first-ever “Queen of Pride” contest to celebrate Pride Month.

The Newport Beach, California-based chain says the contest is both a celebration of drag culture and a chance to donate to LGBTQIA+ organizations.

When ordering through the app or online, customers can choose between three entrees named for noted drag queens. There’s the Trixie Mattel Pride Burrito, the Kim Chi Pride Bowl or and Gottmik Pride Salad. Chipotle donates $1 for each order to that star’s designated charity through mid-June, up to $15,000.

The star with the most orders at the end of the competition wins the Chipotle Queen of Pride crown, with an additional $10,000 to donate to their selected charity. These include GLAAD, Trans Lifeline, a nonprofit organization that offers direct emotional and financial support to trans people, and the Human Rights Campaign, a civil rights group.

And yes, of course, there’s a performance.

Chipotle’s Drag Lunch is slated for June 13, with Mattel hosting on her YouTube channel. The trio promises some comedy and “Chipotle-fied looks,” as well as general burrito banter.

Chipotle is also running the Trevor Project x Chipotle, which encourages guests to round up their order total to the next highest dollar.

This isn’t Chipotle’s first time down the drag runway.  Earlier this year, it launched a collaboration with e.l.f. Cosmetics. It introduced the Eyes. Chips. Face. Bowl, an all-vegan entrée curated by both Mattel and Kim Chi. And e.l.f., with its all-vegan products, created a limited-edition collection to support it. That included a Chipotle eyeshadow palette, Make it Hot lip gloss, and an Extra Guac face sponge set, as well as an Eyes Chip Face makeup bag.