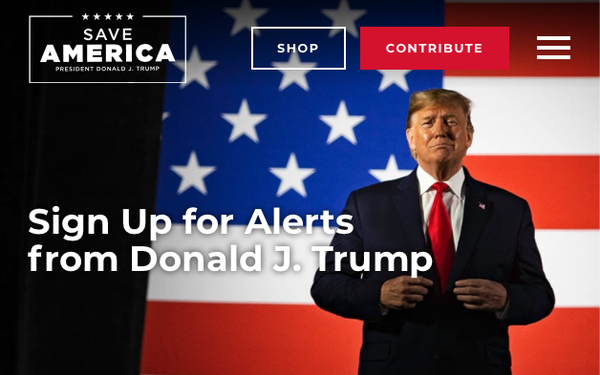 Former President Donald Trump has shut down his blog, which launched last month to worldwide headlines but failed to draw much of a following.

Trump unveiled “From The Desk of Donald J. Trump” on May 4 -- around three months after Twitter, Facebook and YouTube threw him off their platforms. The companies did so after an insurrectionist mob of his supporters stormed the U.S. Capitol in an attempt to prevent Congress from certifying the results of the 2020 presidential election.

While Trump's website no longer offers his blog, the site does contain a “news” section that offers archived statements -- at least some of which continue to press his false claims of election fraud.

When former Nevada Republican Party chairwoman Amy Tarkanian asked whether Trump's move might be “precursor to him joining another social media platform,” Miller responded, “Yes, actually, it is. Stay tuned!”

The Washington Post reported on Wednesday Trump's decision to take down the blog was driven by news accounts about its relatively small audience.

For the week ending May 18, the blog drew four million visits -- less than either Petfinder, the Atlantic or Squarespace, according to the Post.

NBC News separately reported recently that in the blog's first week, it drew only 212,000 “engagements” -- meaning backlinks, likes, shares and comments on other social platforms.

By contrast, before his ban by the major platforms, he had 88 million followers on Twitter and 32 million on Facebook.