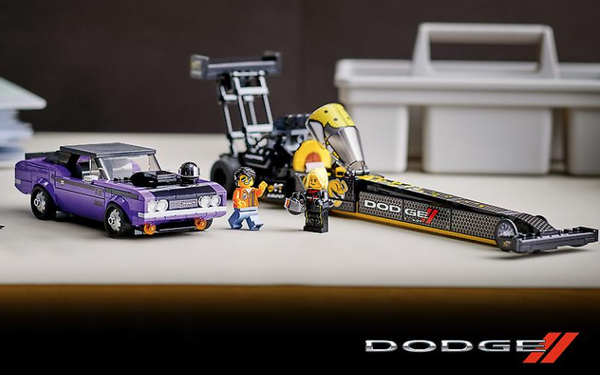 Dodge and The Lego Group are partnering for a second Lego Speed Champions collaboration pairing the two iconic brands.

Owning, or aspiring to own, a Dodge muscle car is as much about the lifestyle of joining the "Brotherhood of Muscle" as it is about the vehicle purchase, said Tim Kuniskis, Dodge brand chief executive officer-Stellantis.

“As a result, our brand enthusiasts are passionate about all things Dodge, including the latest cool collectibles,” Kuniskis says in a release.

With 627 pieces, the Dodge set featuring the 1970 Dodge Challenger T/A and the Mopar Dodge//SRT Top Fuel Dragster includes boxed art of their real-life counterparts to compare the Lego creations with the real-life machines.

The collectible toy vehicles in the building set come with a wide chassis, which allows for more detailing with decorative stickers, including the two miniature figures donning Dodge apparel and race helmets.

Stellantis' Jeep brand also has a relationship with Lego. The two brands partnered for the first-ever Lego model of a Jeep SUV, the Lego Technic Jeep Wrangler, in December.