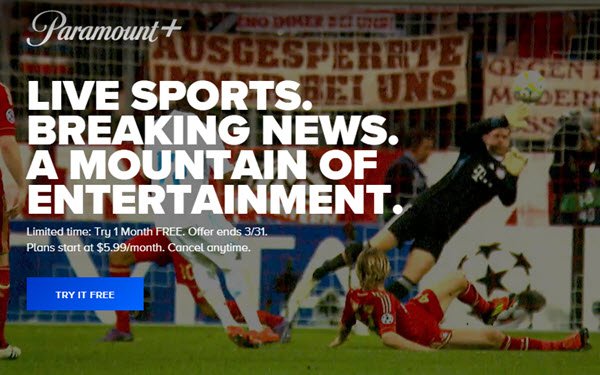 At $4.99 per month, the ad-supported version of Paramount+, launching today, is a bit less expensive than the CBS All Access Limited Commercials version it’s replacing.

One reason: Unlike the All Access plan, which cost $5.99 per month, the new, limited-commercials Paramount+ Essential service does not provide access to local CBS stations.

Annual Essential subscriptions go for $49.99, or nearly $10, which equates to getting two months of free service.

ViacomCBS simultaneously announced that iParamount+'s feature film library will add 1,000 titles starting June 10, and reach 2,500 titles in its feature film library by the end of this summer. The service will exclusively debut “Infinite,” a sci-fi action film starring Mark Wahlberg and Chiwetel Ejiofor, on June 10. “PAW Patrol: The Movie” will debut on the service on Aug. 20, the same day it hits theaters. Paramount+ will also be the streaming home for the hit “A Quiet Place Part II,'' following its theatrical release. The company also announced its summer series slate.

ViacomCBS had indicated that it would be launching an ad-supported version of Paramount+ soon, but had not revealed the date or other specifics.

The Essential plan offers access to live sports including CBS-broadcast NFL games, the UEFA Champions and Europa Leagues, in addition to 30,000 episodes, movies and Paramount+ originals and 24/7 news access via CBSN.

The premium version of Paramount+, which costs $9.99 per month and carries ads only in live programming, replaced the no-ads version of CBS All Access as of March.

That plan includes all of the above plus access to additional top soccer leagues and other sports, including NCAA basketball and PGA golf; live-streams of local affiliates in 200-plus markets; local and national news vis CBS live as well as CBSN; the ability to download shows to watch them offline; and support for HDR, Dolby Vision and mobile downloads.

ViacomCBS reported having 36 million streaming subscriptions worldwide after adding 6 million through Paramount+ and other paid services during this year's first quarter.

The new, cheaper ad-supported Paramount+ tier is designed to increase the brand's overall addressable reach and expand ad inventory, which will be offered through the company's OTT video ad platform, EyeQ, as well as provide more flexibility in working with distributors and running promotions.

CEO Bob Bakish has stated that ViacomCBS expects that eventually, the ad-supported tier will generate higher ARPUs than the premium Paramount+ service.

This article has been updated to include news about the streamer's addition of movie titles to its library.