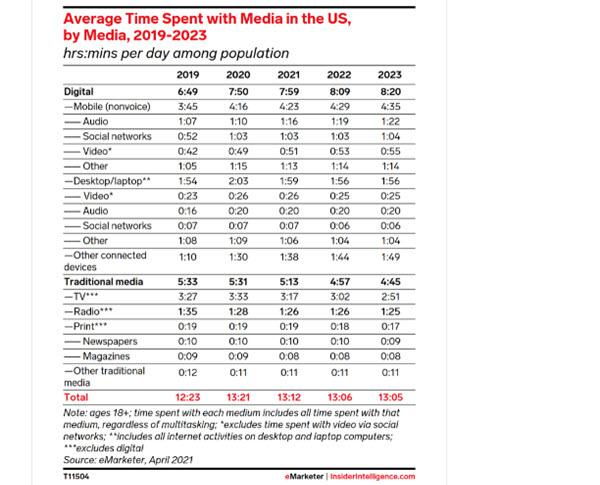 Most of the huge pandemic shelter-at-home-driven gain in time-spent with media last year will stick this year and through 2023, according to the latest eMarketer projections.

This year, digital’s YoY growth will decelerate to 2%, but digital media will still see a healthy nine-minute gain. Modest growth will continue through 2023.

Not surprisingly, time spent with media on connected TV devices, connected gaming consoles and smartphones will continue to increase, with OTT streaming services driving most of the connected-device gains.

Smartphones will continue to dominate time spent with digital media on any device, adding to 2020 gains. Mobile overall gained a significant 31 minutes last year, to reach 4:16 per day, and is projected to gain another seven minutes in 2021, and six in both 2022 and 2022.

After gaining nine minutes in 2020 to reach an average 49 minutes per day, mobile-based video is projected to gain two seconds this year and each year through 2023.

Desktop/laptop-consumed video rose by an average three minutes last year, to 26 minutes per day, but is expected to stall this year, and flatten to 25 minutes in 2022 and 2023. That’s in line with the expected decline in desktop/laptop use, in contrast with mobile gains, going forward.

Mobile-based social media time rose by 11 minutes last year, to reach 1:03, but is expected to remain flat until it sees another small bump in 2023. Desktop/laptop-based social was one of the few media segments to see no gain during the pandemic, and by 2023, it’s projected to dip by one minute, to an average total of six minutes per hour.

Meanwhile, despite the pandemic, traditional media as a whole saw a slight decline in time-spent last year—down two minutes, to 5:31 per day on average.

That decline was largely driven by a loss of seven minutes for radio.

Thanks to increased news consumption, TV saw its first gain since 2012, adding six minutes to reach an average 3:33 per day last year.

But TV’s decline will resume this year. Time-spent for traditional media overall will decline 5.7%, or 18 minutes per day, and TV will account for 16 minutes of that loss.

The decline is, of course, being driven by streaming services adoption and cord-cutting.