Has COVID-19 Changed Mobile Finance? You Can Bank On It 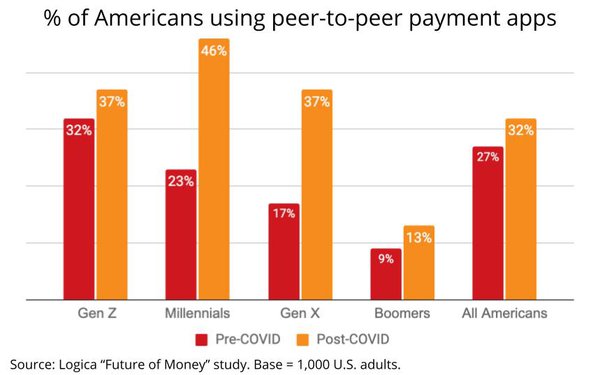 Like so many other areas of consumer media adoption, the COVID-19 pandemic accelerated mobile adoption of financial apps, according to a new report ("The State of Finance App Marketing") released this week by AppsFlyer. While that may not seem like much of a surprise given how many other forms of mobile marketing the pandemic accelerated, it’s noteworthy because finance has been an area consumers have historically been loath to experiment with. For those who remember, the automated teller machine, or ATM, was first introduced in the mid-1960s, but it took two decades before they were widely used by banking customers.

And while mobile banking and various other financial apps have been growing steadily in recent years, there was a COVID-19 bump as consumers sought out more “contactless” ways of handling financial business.

As a broad category, adoption of so-called fintech apps grew 132% over the past year, according to AppsFlyer’s research, including 110% in the U.S. alone.

“Fintech experienced rapid digital transformation over the last year, with the pandemic leading to a shift in mindset even for those that have been slow to adapt,” AppsFlyer Head of Content & Mobile Insight Shani Rosenfelder says of the report’s main finding.  He advises marketers to “strive for efficiency with their spend by following the rising cost-per-install trend and focusing on user acquisition to meet new demand.”

In other words, financial services marketers need to embrace more affordable “remarketing” campaigns to keep their brand’s top of mind with existing customers, while recruiting new ones, too.

The pandemic effect hasn’t just been a boom in mobile banking, but has also accelerated adoption of so-called peer-to-peer payment apps, including PayPal, Venmo, Google Pay, Apple Cash, and the like.

Again, while that trend had already been accelerating, the pandemic appears to have fast-forwarded it, according to another report (“The Future of Money") released this week by Logica. The study found that a year after the pandemic, nearly a third of all Americans (32%) are now using P2P payment apps, up from 27% last spring. Moreover, a third who were already using them before the pandemic, say they are now using them more.

While these changes in finance, banking and payment methods impact marketers in many categories, they represent a fundamental shift for those in financial services.