Ford, Subaru Lead Automakers In TV Spending, Up 56% In May 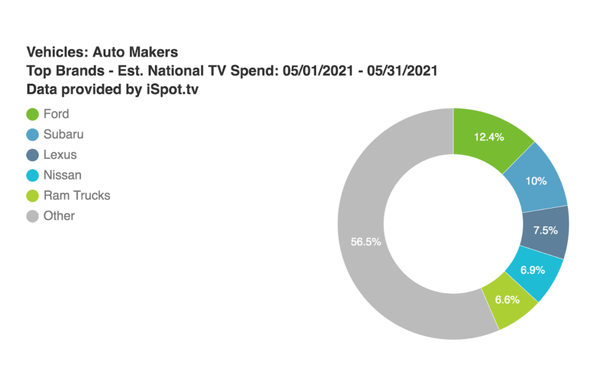 Automakers spending on TV advertising continues to rise with Ford and Subaru leading the way.

“May 2020 was still full of uncertainty for TV advertisers, and many automaker brands pulled back spend without the typical slate of prime-time programming and live sports,” said Stu Schwartzapfel, senior vice president, media partnerships at iSpot.tv. “This May, however, auto ad spend surged during prime time (up 47%) and weekend afternoon (up 135%), dayparts that are key to getting messaging in front of big audiences.”

Six of the top 10 shows by spend were sports-related, and sports-related shows accounted for over 25% of auto spend for the month (nearly 20% of impressions).

In May, “The New Nissan” earned 9,7% greater attention than the norm for auto ads that month, according to Ace Metrix Creative Assessment. Subaru’s “Dog Tested: Honk” was 31% more likeable than the norm, while 44% of survey respondents found the characters (all dogs) to be the single best thing about the ad.

Out of the top 20 automakers, all but one (Toyota) increased year-over-year national TV ad spend in May. With so much more premium programming available, 12 of those brands more than doubled spend compared to last May.

Although Toyota was the only brand out of the top 20 to decrease compared to last year, dipping a little over 41% to $8.6 million, it was also the top spender last May while many competitors pulled back.