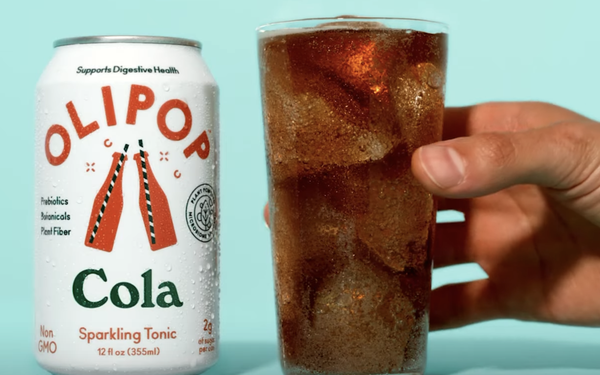 Gut-friendly soda brand Olipop disagrees with Pepsi’s definition of “compromise” but welcomes being in a conversational spotlight with the global beverage titan.

As previously reported, Pepsi has been using contextual targeting to reach men who feel they have compromised things they wanted at work and home during the pandemic to the benefit of others.

The creative for Olipop mimics the Pepsi Zero Sugar spots in format and tone but diverges on language.

A 30-second spot opens with a cola-colored beverage being poured into a glass accompanied by a voiceover that says “Zero sugar. Zero fiber. Zero health benefits whatsoever?”

The camera then cuts to a can of Olipop cola while the voiceover cites its digestive health benefits. “Delicious soda that’s actually good for you. Anything else is a compromise.”

The ad campaign appears on streaming audio and television platforms including  Hulu, Sling, Pandora, and SiriusXM. Olipop is using data to target audiences shown to have purchased such competing brands as Coca-Cola and Pepsi.

Olipop is backed by research from nutritionists and microbiologists who advise a shift from ingesting more probiotics—known as “good bacteria”—to using prebiotics and fiber as a way of modulating optimal digestive health, according to co-founder David Lester.

“The simple explanation is that instead of putting more good bacteria in, we’re better off feeding the probiotics we already have and nourishing our gut microbiome,” Lester tells Marketing Daily.

For Olipop’s founders, the Pepsi campaign represented a means of leveraging the latter brand’s media reach and frequency. “We looked at that and said it’s too good an opportunity not to enter into the conversation," says Lester. "Our perspective is that drinking a product with no nutritional value is actually a compromise.”

Olipop considers its five-flavor line to be sparkling tonics, as reflected on labeling.

“The soda category actually started out as tonics sold in pharmacies with functional ingredients in them,” says Lester. “In some ways, this is us getting back to the origins of sodas and where they began.”