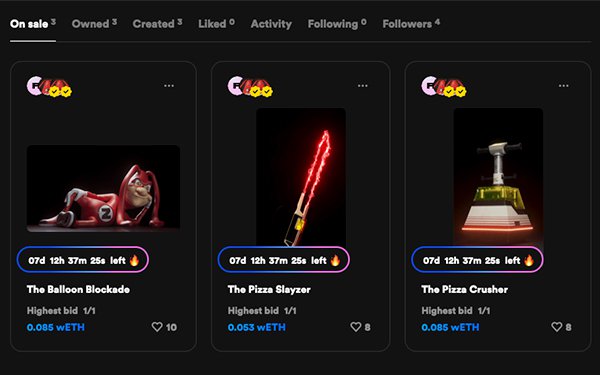 In this campaign, NFTs stand for Noid’s Failed Tools.

“It was just a matter of time before the Noid turned to crowdfunding for its future plots,” said Kate Trumbull, vice president of advertising for Domino’s. “It’s classic Noid. No one can be sure what the Noid will do next, but whatever it is, we’ll do anything and everything it takes to stop it.”

The NFTs are up at auction for 14 days. NFTs are pieces of unique digital code stored on the blockchain, linked to underlying assets from images to GIFs to memes. They can be bought and sold or auctioned and are often purchased with cryptocurrency.

The campaign, created by WorkInProgress, has no paid media supporting it. Rather, it’s being promoted through exchanges between the Domino’s and the Noid’s Twitter profiles, arguing for and against buying the NFTs.

The Noid account also reached out to folks who expressed interest in its tools, the NFTs, and like a true troll, to Domino’s competition, Pizza Hut.

To counter this, Domino’s launched a TikTok campaign on June 10 that shows the Noid trying to fit in with the TikTok crowd. It does not go well. The brand wants fans to duet the video and show how they “Avoid the Noid.” Domino’s partnered with five TikTok influencers who will show their fans how to do so in clever ways.

“The rivalry between Domino’s and the Noid gave us a chance to play in the NFT space where we could tell two stories – one encouraging fans of the Noid to buy them, and another warning fans of Domino’s to not purchase them,” said Kelly McCormick, creative director of WorkInProgress. “Speaking from both ends helped us reach a wider audience and put a new twist on how brands act in the NFT world.”

The agency noted that they hadn’t seen a brand warn people not to buy NFTs, so it was a way for fans of both sides to engage in the debate.