What's So Funny About Insurance? Don't Ask Me, Ask LiMu The Emu 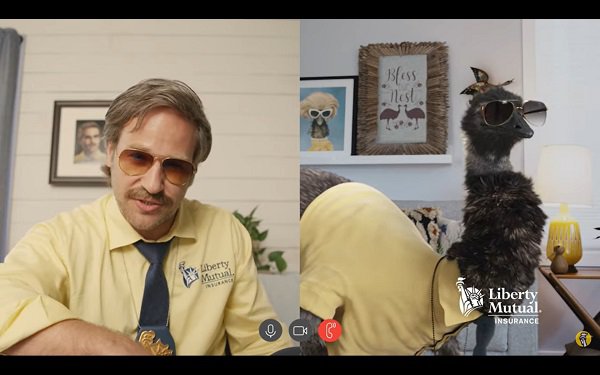 It took me quite a long time for it to suddenly dawn on me that the emu in the Liberty Mutual Insurance commercials is supposed to rhyme with “LiMu,” a shorthand version of Liberty Mutual whose widespread adoption among consumers is one of the aims of this series of commercials.

Sometime after that, I learned that the emu is actually named “LiMu,” as in “LiMu the Emu.” Call me stupid if you want (as a columnist, I’m used to that), but I tend to blame the commercials when their messages are not more or less immediately apparent to me.

Having said that, I am also willing to concede that all of the information necessary for me to understand the emu’s role in these commercials, along with his human pal “Doug” (pictured above in a screen-grab from one of last year’s spots), is indeed provided in every one of these Liberty Mutual (“LiMu”) commercials.

In fact, in one way or another, the messaging in the insurance commercials on TV is consistent, despite the distractions presented in the spots by their tendency toward situation comedy that is often broadly expressed.

Taken as a whole, commercials for insurance companies comprise a category all their own. Everyone knows the spots for Geico (many featuring the gecko and others not), Progressive (with the ubiquitous Flo and her colleagues), Farmers (with J.K. Simmons leading tours of an insurance-disaster museum), State Farm (with the guy in the red shirt named Jake and sometimes featuring NBA star Chris Paul) and Liberty Mutual.

One reason given historically for all of these insurers taking a lighthearted, comedic approach to their commercials is because insurance, by its nature, is a pretty dry subject. According to one source I read on online, Geico is generally credited with kickstarting the comedy trend in insurance commercials.

As a group, insurance companies represent one of the largest of all categories of TV ad spending. This should come as no surprise to anyone who regularly watches ad-supported television.

The insurance-commercial universe also consists of more than the short list inventoried above. Another series of Liberty Mutual spots have nothing to do with an emu.

These are the spots that look like they were filmed around New York Harbor somewhere, with the Statue of Liberty in the background -- in a sense adopting this famed landmark as a symbol of “Liberty” Mutual.

These are mildly entertaining spots, but here again, the message is lost on me. Or, if not lost, per se, while I write this, I struggle to recall what the message is, and I come up empty.

Recently, Progressive had a series of spots with “Dr. Rick,” the self-help consultant who is seen in the spots holding seminars and workshops aimed at instructing young adults how not to become like their parents.

These spots were hilarious, but when it comes to remembering their message, my mind is like a sieve. I can even remember that the messages were given, and yet, I just cannot remember them.

Most of the insurance spots hit me in more or less this same way: They are attractive spots, vaguely humorous and lighthearted, but afterwards, I often cannot remember the company name or the selling message.

By now, this is not a problem with the Geico or Progressive spots. Both companies have saturated TV so completely that at the very least, the names of the companies are not easy to forget. Liberty Mutual is easy to remember too, even if the emu connection eluded me.

For that matter, so are the disaster-museum Farmers commercials, due mainly to the “We are Farmers – Dum-de-dum-de-dum-dum-dum” jingle. As for the disasters dramatized in the spots, if my car ever takes flight and, say, crashes into a lighthouse, I will know which company to call.

With all due respect to State Farm's Jake and Chris Paul (whose Phoenix Suns just eliminated the Denver Nuggets in the NBA playoffs), that was the one company I had to Google for this TV Blog.

insurance, television
1 comment about "What's So Funny About Insurance? Don't Ask Me, Ask LiMu The Emu".
Check to receive email when comments are posted.
Next story loading