FreeWater: Advertising And Charity In One Container 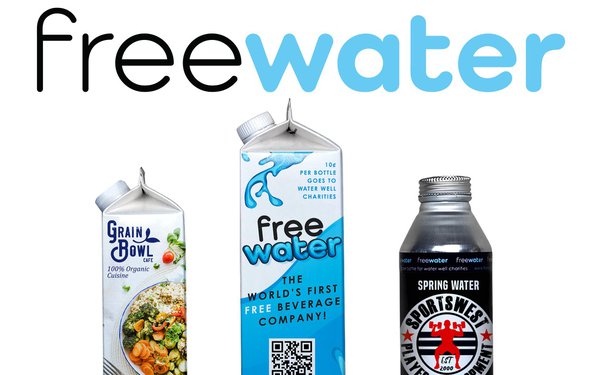 Can advertising pay for free spring water to help those who can’t afford to get their own?

The military veteran just launched FreeWater Inc. based on his experience in assisting needy refugees. He envisions FreeWater as a B2B and B2C platform fueled by revenue from ads on paper cartons and aluminum cans of spring water.

Marketers buy the ads and can also use QR codes to link to any digital materials. They can distribute the water for free or sell it for a profit. FreeWater donates 10 cents from each carton and can to nonprofit organizations that build water wells and systems in Africa.

In this interview, edited for brevity and clarity, FreeWater founder and CEO Cliffords explains the marketing channel’s audience targeting potential and other use cases he envisions going forward.

CPG FYI: How did you become aware of the water crises in other countries?

Cliffords: In 2015, my wife and I launched a nonprofit organization in Europe to help the refugees who were pouring in. We gave water, food, clothing, toys and medicine to more than 10,000 people. A lot of these people would have to walk hours in their country to get to the nearest water well. One day you walked to the water well and it was all dried up—or it had been taken by force.

CPG FYI: What’s the business model behind giving away water?

Cliffords: The water is free because the packaging is obviously the ad space. When you've got that product in your hand, you can scan the QR codes to, for example, engage with augmented reality, collect coupons, watch videos, shop, order food or download music, movies, TV shows, video games or software.

CPG FYI: What’s been your progress so far?

Cliffords: To get our project rolling, we’re currently reliant on B2B. For example, a gym in Los Angeles has purchased some 15,000-odd units. We sent the water directly to them and they’re distributing it. What they did with their packaging was to add QR codes to help them sell some supplements.

CPG FYI: What about the consumer side?

Cliffords: The future is B2C, which means you’ll get water directly from our company. The big picture is, you’ll most likely come and pick the water up from us in your local neighborhood because we’re going to pay you to pick it up from us. Every single time you pick up 100 beverages from us, you’re going to leave with a five-dollar bill.

CPG FYI: Explain how audience targeting can work for advertisers.

Cliffords: Let’s say Farmer’s Insurance is really keen on reaching a university. Then we’ll go to the University of Texas or NYU or whomever they’re targeting and say, “Farmer’s Insurance wants to pay you guys 10 cents per beverage to help us distribute these 50,000 beverages.”

We’re trying to work out a deal in Los Angeles with a dentist that has eight locations. Their desired audience is people who are over the age of 65, and they’re looking to create a partnership with some retirement centers. The retirement centers would give away the free water and get paid to do it. Now you have the product in the hands of the people you want to come into your dental office.

CPG FYI: What else do you have in mind?

Cliffords: We’ve got a lot of different use cases. The Centers for Disease Control should be giving out boxes of water telling you to social distance or telling you where to get your vaccine.

When there’s a tsunami in another country or a humanitarian disaster, today we’re potentially giving people bottles of Dasani or whatever. In the future, you’ll be printing life-saving information directly on the packaging. This is where the hospital is, this is how you apply a tourniquet, this is how you purify water, this is where the food drops are, scan this QR code to get the latest information from your government. Scan the code to tell your government information they don’t know. It’s literally a blank canvas.