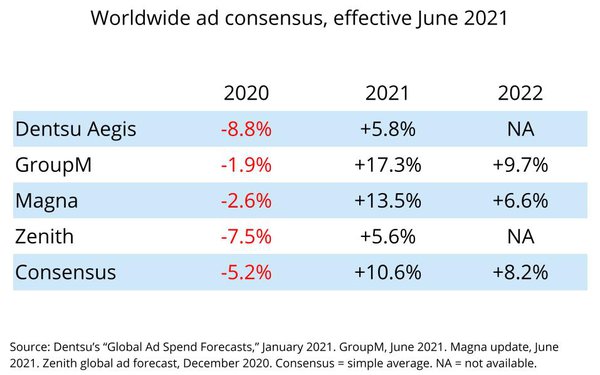 Days after WPP's GroupM unit issued an especially rosy update to its U.S. ad outlook, GroupM -- as well as IPG Mediabrands -- have updated their global forecasts, bringing Madison Avenue's consensus for a gain of 10.6% in worldwide ad spending.

That's a marked 3.3 percentage point improvement from January 2020, when the Big 4 agency forecasting units consensus for 2021 ad growth was +7.3%

"As the economy recovers faster than expected globally -- GDP +6% -- and in most markets, so does marketing activity and advertising spending," the Magna forecasting unit notes in its June update report, adding, "With the added driver of rescheduled international sports events, Magna forecasts global all-media advertising spending to grow by $78 billion to $657 billion in 2021, a new all-time high."

"Midway through 2021, it has become apparent that the market is growing much faster than we expected and from a larger base than we previously believed," GroupM's Business Intelligence unit echoes in its global forecast update, released this morning. "While many of these growth factors were in place before last year, the pandemic has proven to be an accelerant. Factors causing higher than expected growth include faster than expected expansions of app ecosystems, rapid small business formation activities and the growing role of cross-border media marketplaces, especially involving manufacturers based in China. These elements are most tangibly contributing to accelerated growth in digital advertising."

If the effects of the U.S. political ad spending in 2020 are removed from its calculations, the agency says global ad spending will actually expand 19%, though the agency also cautioned about potential concerns of another big "cyclical" advertising event, the Tokyo Olympic Games, which were moved from 2020 due to the COVID-19 pandemic, though some uncertainty remains.

"We must also consider the possibility that the Tokyo Olympic Games could still be canceled," GroupM warns, noting, "Organizers continue to move forward with a July 23 opening, but public opinion in Japan is firmly against the games. An Asahi Shimbun poll from May 18 found that 83% of Japanese voters now want the games to be canceled or postponed, up markedly from earlier polls. Vaccination rates remain very low in Japan, and large parts of the country are under a state of emergency." 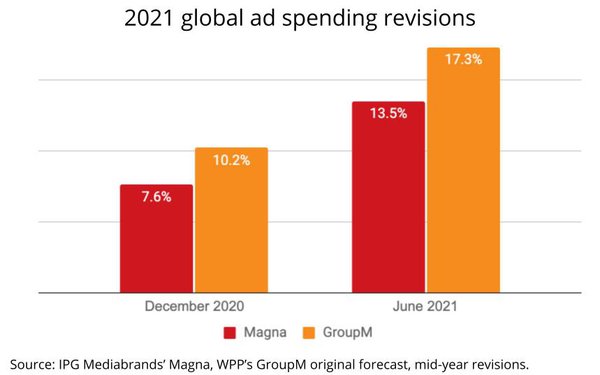