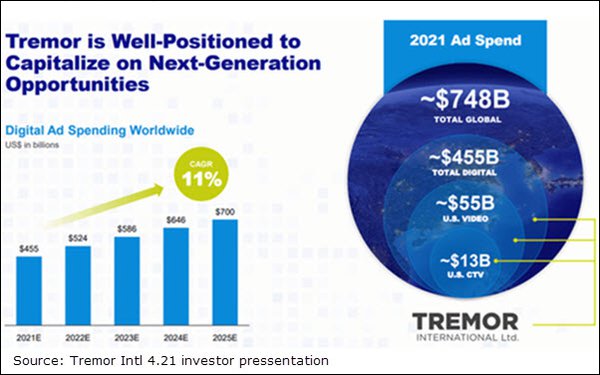 Tremor International’s stock dipped 4.4%, to $11 per share, in U.S. OTC trading on Monday, after the company announced terms for a planned uplist IPO that values Tremor at $1.7 million on a fully diluted basis.

Tremor’s stock also declined 0.5% to 7.82 pounds ($11.03) on London’s AIM market, where it trades under the symbol TRMR—the same symbol it plans to use for going public on the Nasdaq, reports Seeking Alpha.

However, the stock had risen 16.6%, to a session-high $11.50, on May 25, when Tremor filed its F-1 notification of the Nasdaq IPO with the U.S. Securities and Exchange Commission.

The now-announced terms call for Tremor to sell 6.8 million American Depositary Shares (ADSs) at an expected $22.17, which is two times where the company’s stock closed on Friday on the AIM exchange, SA notes.

Each ADS will represent two of the company’s ordinary shares. and Tremor has also given underwriters the option to buy about 1 million additional ADSs to cover any overallotments.

Tremor expects to have about 149.7 million ordinary shares following the IPO, or about 151.8 million if underwriters exercise all overallotment options.

“We believe the digital advertising market remains fragmented and that our full-service, end-to-end software platform and vast expertise within video and CTV puts us in a strong position to continue to increase our market share from traditional ad sales channels,’ Tremor wrote in the F-1.

The company has stressed its positioning to benefit from the rapid growth of digital ad spend, which is projected to see CAGR of 11% over the next four years, rising from $455 billion in 2021 to reach $700 billion by 2025.

Tremor reported having about 900 advertising customers and 1,450 publishers as of the end of this year’s first quarter, and serving ads in more than 100 countries to 800 million unique users.

In January 2020, Tremor acquired Unruly from News Corp for an undisclosed price. News Corp acquired a 6.9% stake in Tremor, which agreed to spend a minimum of $39 million on advertising in News Corp media over three years, according to SA, which notes that two News Corp executives now sit on Tremor’s board.

Like other ad-tech firms, Tremor’s business was hit by advertising cutbacks during last year’s pandemic. However, it still generated $5 million in revenue in 2020, and reported $12 million in Q1 2021.

Tremor is “rapidly growing its top-line and bottom line, with the former up 96% year-over-year and adjusted EBITDA up 4,935% in Q1 2021 versus the year-ago quarter." The stock was “cheaply valued” at about four times forward sales, he added.

However, he acknowledged that, like other ad-tech companies, including The Trade Desk, “Tremor’s business model relies on cookies to gain insights into consumers… In 2022, digital advertising companies will have to find a way to navigate this uncertainty and grow their revenues with less tracking technology data… Tremor and others may have to find new technologies to keep their businesses viable.”