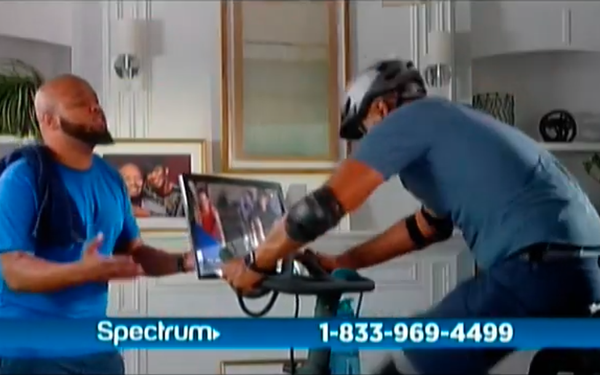 Charter Communications should revise ads boasting that its internet service offers the fastest downloads, as well as ads implying that AT&T doesn't have fast enough speeds to stream online exercise classes, a self-regulatory watchdog said in a new decision.

The decision, issued by the BBB National Programs' National Advertising Division, stems from a challenge by AT&T to two Charter ads for its Spectrum internet service.

One of the spots features a couple coming home to find comedian Tony Baker throwing a party in their house, with all the guests a sports game on television. He says he's there because he has “DirecTV Select, so no ESPN.”

The ad then shows one of the same homeowners again finding Baker in the house, this time working out on a stationary bike while taking a virtual exercise class. He says he's using their house because his home internet service “can't handle this speed.”

The homeowner then suggests switching to Spectrum, noting it offers service at speeds of 200 Mbps.

The National Advertising Division agreed with AT&T, even though the spot didn't mention AT&T itself, but its DirecTV property. The organization wrote that a “reasonable takeaway” from the ad is that Baker is an AT&T customer, given that DirecTV and AT&T are available as a bundle in markets where the ad appeared.

The group added that the spot “reasonably conveys the implied claims that AT&T does not offer 200 Mbps internet speeds and does not offer speeds sufficient to stream a live or on-demand exercise class.”

The National Advertising Division specifically found that Charter failed to prove that AT&T's service isn't fast enough to stream online exercise classes. The watchdog noted that AT&T offers service at a range of speeds, including fiber service of almost 1 Gbps. The group also said a report submitted by Charter concluded that AT&T offers download speeds of at least 25 Mbps -- which is faster than the 10-15 Mbps minimum recommended by exercise company Peloton -- in more than 70% of its footprint.

The other ad challenged by AT&T boasted that Charter's Spectrum service offered the “fastest download speeds,” and implied that AT&T doesn't offer internet service at speeds of 200 Mbps or faster.

The National Advertising Division said Charter should either stop making that claim, or should revise it to explain that AT&T offers speed tiers, and has equivalent speeds at its top tier.

Charter said it plans to comply with the recommendation, according to the watchdog.