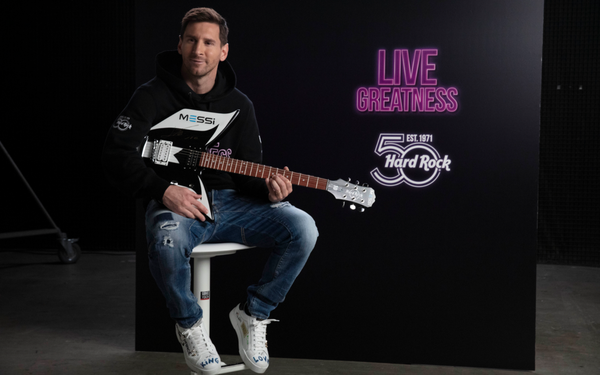 Hard Rock is partnering for the first time with an athlete and introducing a related merchandise collection.

Soccer star Lionel Messi will serve as the brand’s ambassador for the next five years, which includes the brand’s 50th anniversary this month.

Grey Group Spain created a video to introduce Messi’s partnership with the hospitality company. It is running digitally and on social media, with plans for broadcast channels in July, per a spokesperson.

The Hard Rock brand has grown to become one of the world's most recognizable brands, with a cafe, hotel or casino located in 68 countries, said Jim Allen, Chairman of Hard Rock International.

"As we reached our 50th anniversary milestone, we knew that we needed to partner with an icon to help us celebrate in a new and unexpected way, and there was no better choice than the legendary Lionel Messi,” Allen say in a release.

In addition to the special 50th anniversary logo, the garments show some of the player's symbols, such as the lion, the number 10 from his Barcelona jersey and Messi’s own logo. This collection joins the brand's existing merchandise line, available in its stores and online shops.