New Disney+ Series Depicts A Fearful World Much Like Our Own 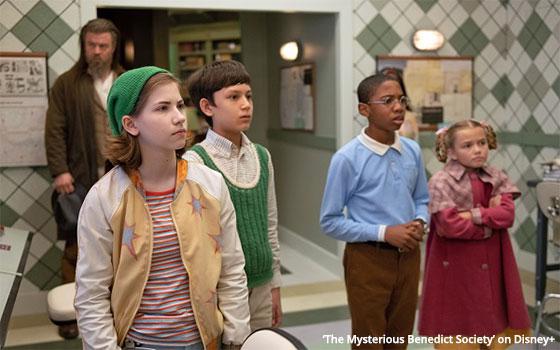 The most surprising thing about this new Disney+ series called “The Mysterious Benedict Society” is what an unseen narrator says about the society in which the show takes place.

Although its locale and time frame are purposely staged and designed to be unspecific, and representative of just about anywhere, the narrator’s description of this make-believe world sounds just like our own.

In the show, the narrator tells us that the world is in the grip of a debilitating crisis known popularly as The Emergency in which “every day our minds are under attack by a plague of fear and anxiety.” Sound familiar?

In Episode Two, The Emergency is explained even further. “We suffer under something called The Emergency,” the narrator says, “[which is] a rapidly escalating state of panic in which truth itself is under attack.” This sounds like our world too.

Visual clues appearing organically and at random help to bring the world of “The Mysterious Benedict Society” into sharper focus.

A headline on a newspaper op-ed page reads: “The Emergency: No one at the wheel” -- an apt description of our own world if there ever was one, particularly for those of us living in New York City right now.

In another scene, workmen are seen in the background putting the finishing touches on a large billboard poster that blares the words “Things must change now” -- a vague, empty slogan that says nothing, and accomplishes the same. Our world today is awash in such sloganeering.

So what is “The Mysterious Benedict Society” going to do about it? Somehow, a foursome of gifted orphans are supposed to go forth into this Emergency-ridden world and wage a battle for truth.

The four, pictured above, have been assembled after a series of rigorous tests, by a man named Mr. Benedict. He is played by Tony Hale, who is this show’s top-billed star, although the four juveniles he is working with steal every scene they are in. It is four against one.

“The Mysterious Benedict Society” has been adapted from a series of YA (young-adult) fiction books by Trenton Lee Stewart.

Those who have read the books are in a much better position to judge whether or not the show is faithful to them, but the show is nevertheless a very winning TV series suitable for children and their parents.

Although the show appears at first to be several parts Harry Potter and Willy Wonka, you quickly form the impression that you are watching something new that stands on its own.

Can this group of children really rid the world of the its anxieties, fears and empty slogans? I intend to find out by watching this entire series.