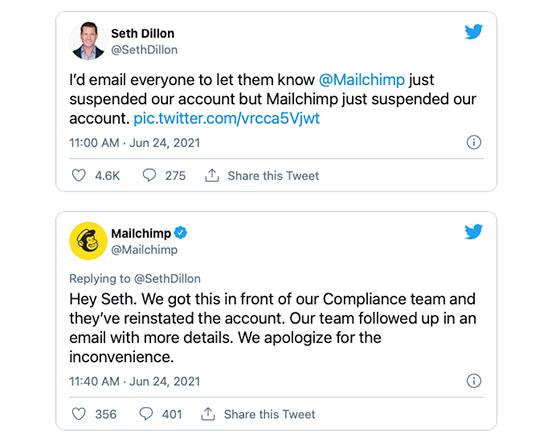 Marketing tech firm Mailchimp has become embroiled in a flap over its apparent cancellation of conservative satirical website Babylon Bee.

Forty minutes later, Mailchimp tweeted, “Hey Seth. We got this in front of our Compliance team and they’ve reinstated the account. Our team followed up in an email with more details. We apologize for the inconvenience.”

Dillon replied: “Thank you, but we’re moving to an email service provider that doesn’t make these ‘mistakes.’ We’d also prefer to be on a platform that doesn’t censor conservatives for being ‘hateful’ or ‘misinformative.’

The episode was reported by Fox. Mailchimp had not responded to a request for comment at deadline.

Earlier this year, Mailchimp suspended the account of the Virginia Citizens Defense League, a pro-gun lobbying group, claiming "a possible policy violation," the league’s president reportedly wrote in an email.

Last October, Mailchimp stated:  “Mailchimp does not allow the distribution of Content that is, in our sole discretion, materially false, inaccurate, or misleading in a way that could deceive or confuse others about important events, topics, or circumstances.”