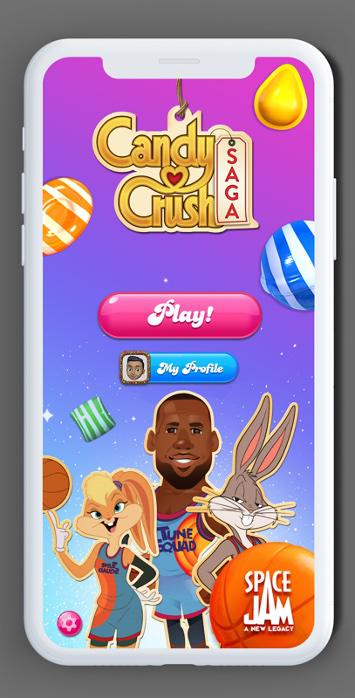 LeBron James, Bugs Bunny and other stars of the upcoming Warner Bros./HBO Max film “Space Jam: A New Legacy” -- apparently not content to just wreak looneyness on the basketball court -- are planning a two-week takeover of another tremendously popular game: Candy Crush Saga.

The Warner Bros. invasion represents the largest branded takeover in Candy Crush’s history, with a persistent banner, a “candified” LeBron James, the first-ever replacement of in-game candies (as the game’s orange candies will become basketballs), and such exclusive video content as a welcome video mashing up Candy Crush with Space Jam, and a film featurette.

“Space Jam: A New Legacy” “appeals to a broad audience, including fans of the original ‘Space Jam’ [1996] and a new, younger audience,” Jennifer Sharp, vice president, global strategic partnerships at Activision Blizzard King, told Marketing Daily. Candy's Crush's appeal is likewise broad. The company “views Candy Crush as an entertainment platform, as most of the players don’t identify as ‘ gamers,’ and are looking for a chance to relax and unwind,” adds Sharp.

The Space Jam “Tunes Squad” will immerse themselves in Candy Crush Saga’s level 25 from July 6 to July 19.  Players will need to free Lola Bunny, Daffy Duck and Bugs Bunny from gum that traps them in the game. As players free the squad members, they’ll unlock extras like video content.

The company says game-provided video content has drawn upwards of 10 to 25 million views in the past.

"Space Jam," perhaps not entirely coincidentally, is about LeBron, his young son and his band of Looney Tuners getting trapped in a digital space, where they need to fight their way out by playing a basketball game for the ages.

In addition to Candy Crush Saga, sister King game Candy Crush Soda Saga will also get in on the pop culture mashup fun by offering a three-week “season pass” from July 8 to July 29, rewarding players who collect basketballs during the game.