Peacock's 'Dr. Death' Is Much Worse Than Kevorkian 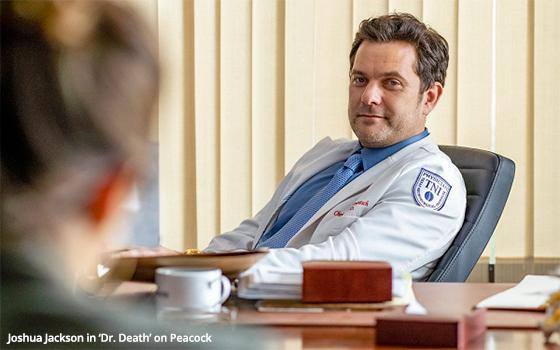 The new Peacock medical drama series called “Dr. Death” is not about the late Dr. Jack Kevorkian, who had that nickname pinned on him at the height of his fame as the world’s most famous proponent of medically assisted suicides.

Instead, the titular doctor of this new TV show makes Dr. Kevorkian seem like Santa Claus. After all, Kevorkian believed doctors should be permitted to assist terminally ill patients facing periods of prolonged pain to end their lives, if they so wished to end them.

Kevorkian at least cared about his patients. He felt the assisted suicides he advocated represented a merciful solution for patients who had no hope of getting better.

But the Dr. Death in this series -- Dr. Christopher Duntsch (played by Joshua Jackson, pictured above) -- is likely a straight-up psychopath who seems to care not at all for anybody else, especially his patients.

While aspects of this series are fictionalized, Christopher Duntsch was a real person: a neurosurgeon who once enjoyed a flourishing practice and a solid reputation in the hospitals in and around Dallas. At t some point in the middle of his career, he earned a new reputation for gross malpractice.

In the TV show, Dr. Duntsch is seen struggling to perform spinal surgeries in scenes that feel so real that they present a real challenge to watch.

Members of Dr. Duntsch’s own surgical team are seen reacting to the ham-fisted manner in which he goes about his work. They wince and frown, and whisper to each other that somebody ought to say something.

The operating-room scenes have even been enhanced by bone-crunching sound effects, as Dr. Death is seen and heard doing so much internal damage to his patients that their conditions worsen in mere days. While watching these scenes, it is impossible not to wince like the surgical assistants in the show.

Some of Dr. Duntsch’s patients die, while others are saved by emergency surgery performed by others. In “Dr. Death,” two of the other surgeons are played by Alec Baldwin and Christian Slater.

After repairing the damage caused by Dr. Duntsch on some of his patients, the two surgeons team up to investigate his background and, hopefully, get him dislodged from the practice of medicine.

They’re great in the roles of the two crusading surgeons --  even Baldwin, who I do not recall ever playing a doctor in his long career.

But the best in show is Joshua Jackson in the title role. His portrayal of the egotistical but incompetent Dr. Duntsch is uncanny. It is one of the best performances seen on TV this year.