Dreary Drama About Child's Murder Is Wrong For Summer 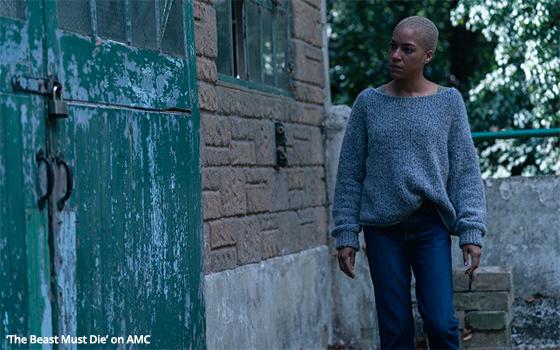 We have been down this same dreary road too many times to count, and it is the TV Blog’s wish that TV producers will someday call a halt to the assembly line that keeps churning out these sad drama series about the murder of children.

This latest example is called “The Beast Must Die,” premiering on AMC in the heart of summer (on Monday, July 12). It begins with a woman facing a camera and stating in a dull monotone that “I am going to kill a man … I’m going to find him and kill him.”

The “Beast” in the title is the person (who the woman assumes is a man) who callously killed her young son with a car in a high-speed hit-and-run on a remote roadway on Great Britain’s Isle of Wight, where the show was apparently filmed.

The woman, named Frances and played by Cush Jumbo (photo above), does not know who the man is, but undertakes her own dogged investigation after local police basically give up on the case.

It is a terribly sad storyline on which to pin a TV series. As a result, its value as a piece of entertainment is questionable, to say the least.

Jared Harris plays the haughty, autocratic lord of an Isle of Wight manor on whom Frances sets her sights. So she goes about ingratiating herself into the life of this over\bearing man and his family.

It is a far-fetched scenario because to this Isle of Wight family, Frances is a total stranger who seemingly showed up out of nowhere in their close-knit -- and in large measure, closed-off -- community.

In addition, her singling out of this man as her prime suspect is based on very little actual evidence, if any at all.

Despite this lack of proof, we are supposed to root for Frances and her single-minded pursuit of this man who, if found guilty in the one-woman court of Frances, will face a death penalty that she intends to mete out personally.

But wait, there’s more. A new director of the local Isle of Wight police department has just arrived, and he will be undertaking his own investigation of Frances.

He is taking refuge in this small community after serving as a police detective in London, where policing was a lot more sophisticated and professional. He is also recovering from PTSD following the shotgun murder of his long-time partner on the London PD.

The Isle of Wight in which he finds himself is damp, dark, dreary and by all appearances, dull as dishwater. And so is this show, unfortunately.