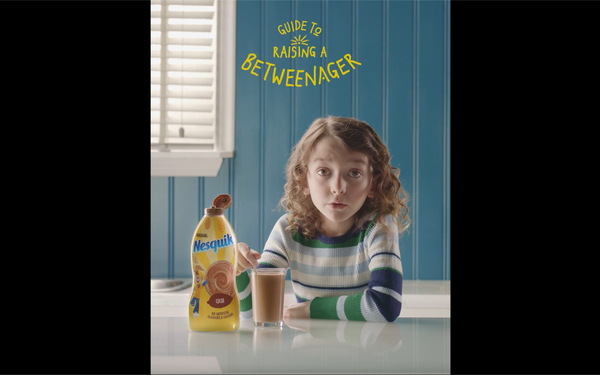 Too young to drive but too old for childhood pleasures? Nesquik had dubbed this age bracket “betweenagers,” and they star in an ad campaign launching the brand’s line of powders and syrups free of artificial flavors, colors and sweeteners. Because you’re never too young or old to enjoy a glass of Nesquik.

The campaign’s tagline, “It’s All in the Making” references mixing the product into milk and how kids initially need an adult to make it but before they blink, they’re making it themselves.

A TV ad, created by McCann Canada, features “betweenagers” expounding on the difference between sparklers and fireworks, giving themselves new hairstyles, and commenting on how piano classes were great life lessons but bad piano lessons. One constant remains: Making and enjoying a glass of Nesquik. The campaign also includes social and digital elements.

“Nesquik is such a nostalgic brand and it was important to us that we create a product that parents could feel good about sharing with their kids,” says Eryn Pasut, Marketing Director of Nestlé Beverages. “We loved the idea of reinforcing not just the fun of making Nesquik, but the role it plays in a kid’s burgeoning independence.”

Revamped Nesquik syrups and powders have new ingredients sans artificial flavors, colors or sweeteners, and additionally include iron and vitamins A, B3 and C. This also marks the launch of a vanilla syrup flavor option.

The cocoa used in NESQUIK chocolate syrups and powders is 100% sustainably sourced and certified by the Rainforest Alliance as part of the Nestlé Cocoa Plan, which helps cocoa farmers build sustainable businesses through ongoing mentorship and resources.