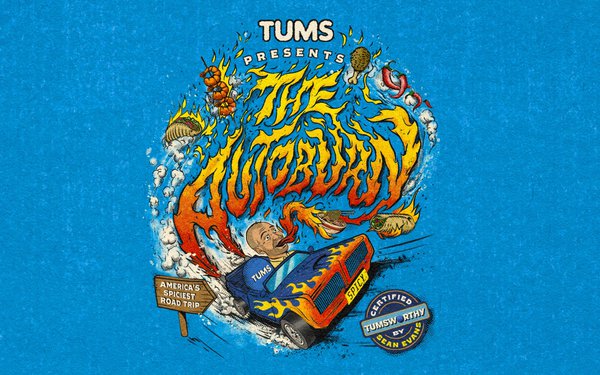 For its Autoburn Road Trip, highlighting what it calls the hottest spicy dishes in every state, Tums has teamed with spicy food connoisseur Sean Evans (YouTube’s “Hot Ones”) to promote foods “certified Tumsworthy.”

The Road Trip involves Evans traveling to seven of “the spiciest, locally owned restaurants in America,” GlaxoSmithKline’s Tums Director Amy Sharon told Marketing Daily. “Each restaurant is known to have some of the hottest dishes in the county, but they will also warm the heart, with the spots all supporting local and charitable causes.”

So far, Evans has visited Salvador Molly’s (“A World of Flavors”) in Portland, Oregon, and Guisados (“Traditional Homestyle Braises”) in Los Angeles, with other locations being kept under wraps until official announcements on social media. But we know the last stop will be in New York City, where Evans will meet up with the winner of a concurrent sweepstakes -- and three of that winner’s friends -- for what Sharon calls a “meal to remember.”

The feast may well involve very spicy salsa, that state’s favorite, according to a recent Tums poll of American’s favorite spicy foods.

In the study of 5,000 Americans, conducted by OnePoll on behalf of Tums between June 8–28, Tums found salsa to be a favorite spicy food of 41%, trailing only tacos (46%), and ahead of Buffalo hot wings (37%) and chili (37%). “However, pizza is the food for which Americans are most willing to endure heartburn,” the survey found.

Tums’ aim, though, is for Americans to avoid the heartburn by making use of its product. "Our survey found that 36% of Americans avoid spicy food because it gives them heartburn, but after the past year, we aren't about to allow something like heartburn stand in the way of anyone's good time," says Sharon. "That's why we are encouraging Americans to dial up the heat this summer and make it one to remember -- and Tums will be there with the quick relief needed to keep the good times rolling, wherever the road takes them."

Too blatant a marketing move? "It’s an interesting take on “You had a crappy year with the pandemic and all, and that didn’t kill you. So how bad could spicy food be?'” notes Robert Passikoff, CEO of brand strategist company Brand Keys.

Irregular dietary habits, along with such other “poor lifestyle choices” as deskbound jobs and poor sleep quality, are leading drivers for antacid sales, according to ResearchAndMarkets.com, which last week valued this year’s global market at $3.3 billion. Those poor lifestyle choices can in turn lead to gastroesophageal reflux disease, currently suffered by 60 million Americans according to the American College of Gastroenterology, which further drives the demand for antacids.

Besides Tums, other leading players in this lucrative field include Maalox, Mylanta, Rolaids, Procter & Gamble’s Pepto-Bismol and the combo antacid/aspirin Alka-Seltzer.

The Tums sweepstakes and Autoburn Road Trip stops are being promoted through paid social media and organic social media, using both Tums’ and Evans’s channels.

The four-week sweepstakes asks participants to visit TUMSAutoburn.com to submit a photo “showing how they are spicing up their summer – and their plates – with friends and family.”

There are 106 prizes in all, including 100 “Travel Kits” with such goodies as hot sauce and Tums, five Igloo coolers, and the grand reward, valued at $6,000:  round-trip transportation for four (coach air fare or limousine service) to meet Evans in New York City, two rooms at a 3-star or 4-star hotel, and a $1,000 prepaid gift card. That should pay for a lot of spicy food -- and Tums for dessert.