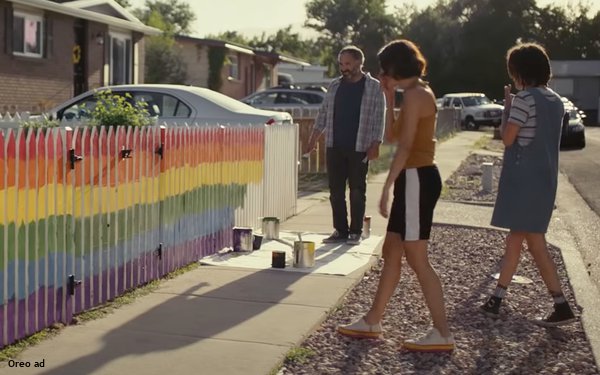 Given widespread support of the LGBTQ community, it’s not enough for brands to simply “rainbow wash” their logos during Pride Month.

The need for brands to provide continual support to—and build connections with—LGBTQ people and their allies was one of the main takeaways from a webinar featuring media, agency and marketing executives on the heels of Pride Month 2021.

The basis of the conversation was a nationally representative survey in May of 5,223 U.S adults conducted by MRI-Simmons. Respondents were asked for their views on and behavior regarding LGBTQ and gender identity issues.

CPG giant Mondelez International has had a Rainbow Council since 1992 to support a working environment that welcomes LGBTQ employees and allies.

It’s one of very few companies of its size to openly support LGBTQ causes throughout the year.

“Our commitment to the LGBTQ employee, and also the community, is really beyond just Pride,” said Joseph Chen, consumer insights, wellbeing and sustainability USA. “Our focus is to keep the conversation going throughout the year.”

To Diane Anderson-Minshall, CEO and editorial director at publisher Pride Media, the Mondelez approach is a welcome trend.

“I think businesses that are really responsive are sort of retooling how they think about pride marketing overall.  They need to move from thinking of pride as a month to add rainbows to their brand logos and find ways to support LGTBQ people all year round,” she said.

Last year, when some advertisers were looking to avoid Pride Month marketing, Bubly said “let’s go all in” via an editorial and branded video partnership called “Out All Night.”

Meanwhile, Oreo has “continued to be like the star among getting it right for marketers in terms of the LGBTQ community,” Anderson-Minshall said, citing the brand’s emotion-laden campaign last year in which a father comes to terms with his daughter’s choice of a female partner.

“It’s one of the reasons I’m still with Mondelez,” said Chen.

One of Oreo’s edgier moves was a recent campaign in some countries to mark the 50th anniversary of Cadbury Crème Eggs. One ad featured a gay male couple kissing—with  a chocolate egg propped between their lips.

“The feedback from consumers was mixed,” said Chen.

“That was really racy. It got a lot of people riled up,” Anderson-Minshall recalled.

A study by Horizon Media conducted in May found that 72% of 18- to 24-year-olds “agree that they are neither completely opposite-sex-oriented nor completely same-sex oriented,” noted Kirk Olson, senior vice president and managing director, cultural intelligence at the agency.

Horizon has an internal unit called Horizon Out that operates as a social group and a resource to the agency, according to Olson. “We help the agency with both what I call inside voice and outside voice.”

In the spring 2021 USA consumer survey from MRI-Simmons, respondents who self-identify as gay, lesbian, bisexual or transgender over-indexed in CPG categories like energy drinks and frozen, vegetarian burgers.

Their households are 40% more likely than all U.S. adults to consume energy drinks and 38% more likely to eat frozen vegetarian burgers.

Top beverage brands in such households include Red Bull (index: 167), Monster (137) and ready-to-drink offerings from Dunkin’ (127).