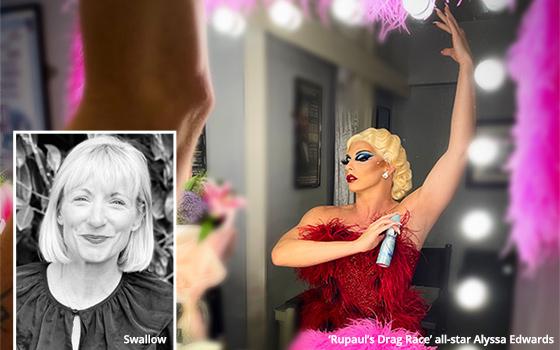 Post-pandemic marketing campaigns continue to roll out messaging that allude to lockdown experiences while underscoring a positive future focus.

One of their new buzzwords is "un-missable," says Kath Swallow, global brand vice president for Rexona at Unilever. But that doesn't mean relentless TV spots and billboard coverage. As she tells Brand Insider this week, it's as much about creating critical partnerships: from a famous drag celeb to video games. It even includes a Degree-branded "Pit Mobile" making neighborhood stops with truly un-missable pit-related imagery.

MediaPost: The "Move Again With Degree" campaign we are going to discuss was based on some of Unilever’s famously deep research. Give us some highlights on what you found about pandemic behaviors.

Kath Swallow: When it comes to being active, the numbers are quite startling. Over half, 59%, of Americans were less active, and they lost a bit of motivation to be active.

From a deodorant's point of view, seven in ten admitted to not using the product. Why? Because they weren't seeing people and they weren't moving.

And then, what was interesting, you see a really direct change in behavior when the country starts opening up. Over half of Americans, 57%, were planning to exercise more, therefore a direct link to the category. It's quite interesting when you look at the stats of what people want to do now that things are opening up.

Being more active was the top one, in parallel, it’s the same number, 80%, with seeing their friends and family, so, really, people are desperate to get active.

MP: You chose some novel channels for the "Move Again With Degree" campaign. One of the most visible is the partnership with Alyssa Edwards. How did this partnership serve the targeting and goals of the campaign?

Swallow: Starting from kinds of partnerships in general, and we have many, we have quite a simple vetting process. We need a values alignment, so the first one from our brand point of view is someone that incorporates movement into their daily lives. And the second one is someone who is an inspirational figure around movement.

Those two are the core structure we put in place in order to then make a decision. So when we look at someone like Alyssa, all of the boxes become ticked.

So whether she's prepping for a drag show or actually coaching young people at her own dance studio, she lives and breathes movement. She's kind of a master of movement, both teaching her craft to others as well as embracing it herself. So with that in mind, we really decided that she was a real testament of someone that celebrates movement and has that positive feel about it and really would drive that positive message that we felt we needed.

MP: So it's less about targeting a particular audience that she has and more about a set of principles that she represents?

MP: And then, what are the sets of executions with these partnerships? What form does it take in reaching consumers? 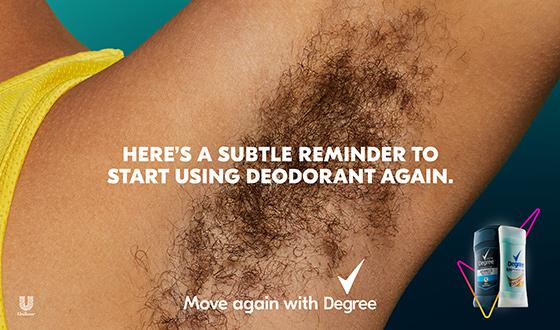 Swallow: We kicked it off with a campaign that was quite visible out-of-home and in Times Square, real talk-able media. And at the same time, Alyssa Edwards coming out talking about the product.

We got her to use the product. She then kind of did interviews, and we leveraged that across all of our own channels. And, to be honest, it snowballed a little more than we expected in terms of the excitement around Alyssa Edwards partnering with Degree.

And I think we were seeing with journalists, they were seeing this direct connection and thinking wow, I would never have thought of that before. But if you listen to what she said, it was such a true, authentic fit. So a lot of the channel, I'd say, was driven through PR as well as the sort of bought media in much more unexpected ways.

MP: That then raises an interesting issue of an almost creative disconnect in the sense that the partnership may not seem natural at first blush, but it sort of forces you to think about it and so pay closer attention.

Swallow: I agree, and I think you see many partnerships where there's kind of inauthenticity in the partnership itself. That’s what comes all the way back to the prioritization on having that right filter in a way, making sure there's a shared set of values with what we're actually going after.

MP: Now, another component is the Pit Mobile effort, which put branded trucks on the street, and that involved a localized activation. And, again, going beyond that traditional advertising thing that you'd associate with a massive CPG brand like Degree. What role do such local efforts play?

Swallow: So, again, this all came from the premise of being un-missable. So quite connected, in a way, with the out-of-home because the Pit Mobile was also started from being around the out-of-home [media] and then, obviously, went around different stops.

But the intention was, again, to remind everyone to move again and get excited about the product. We used it mainly to see sampling. We were saying the thing you do before moving again is put on Degree. This was our way of being un-missable. We used it for getting samples into people's hands, sending out QR codes where they could scan for vouchers. Also capturing consumer engagement in terms of their feelings, their thoughts; always to bring it inside that we might well do something within a subsequent sort of activity.

The biggest brief we gave when we were trying to expand this un-missable content was to stop people in their tracks, really allow people to see this brand, to reappraise what they think of this brand, and to get engaged with the message we have. 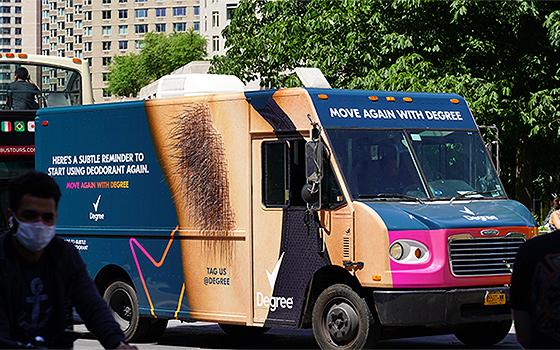 MP: So now let me move over into another partnership. And we go from a drag sports star into video gaming. That seems like an enormous leap, but you also have a partnership with the NBA2K game. How does that relate to the rest of the mix?

Swallow: Degree has an ongoing partnership with the NBA and basketball. We actually kicked off a little bit more of our un-missable approach to NBA with March Madness.

Taking a step back, this to me is a channel. It's a channel, again, to get our message across to the masses, but with a core target of 20 to 35. In March Madness, we started this kind of un-missable approach where we hosted the first ever virtual dance-cam. We gave fans a chance to be featured live on it during the Final Four. I

t was the first time a brand has featured user-generated content in the Final Four. This was about in the break times getting people to move. The theme was still the same, driving our purpose.

When it came to NBA2K, coming back to the brand ethos, people are quite sedentary when they’re gaming. It was an opportunity to provoke a reappraisal of behavior. And so, with the partnership we were there at key moments to get people moving, to ask them to move, trivia questions to get them to prompt the reappraisal of get up, move.

And, of course, then through that partnership we were always able to use all the media within the games to advertise our billboards. So it was sort of a channel, but also a channel where the consumer isn't moving that much, so the channel where we can actually effect positive change.

MP: Given these various very different channels and nontraditional channels, ultimately, how are you measuring impact for all of these? Do your KPIs change at all?

Swallow: So one of the biggest areas of focus at Unilever for brands is brand power. That's something we measure ruthlessly quarter by quarter on all brands. A brand power score is made up of essentially saliency. Is it meaningful in the category? On the one hand, is it doing good in the world? On the other hand, is it meaningful as a deodorant?

And differentiation: Is it different?

All of those metrics form my brand power score. And there is a wealth of evidence that shows the higher the brand power, the more successful a brand in market. A lot of what we're doing at the moment, certainly on Degree, is to try and learn. We want to push things. We want to be un-missable. Maybe some things will work, maybe some things won't, but the intention is, we measure it by increasing brand power. Secondly, of course, is sales. And so the early data is showing a spike in sales.

Again, this is something we want to see consistently. We have another quite exciting activity happening in August, and we're going to be going on this sort of un-missable path to actually prove that, by basically driving brand power and driving sales.

MP: You're using this term un-missable.

The other part that we measure is brand attributes. So every brand at Unilever will have brand attributes that they want to own and seek to own. We are a brand whose purpose is to inspire the confidence in everyone to move more.