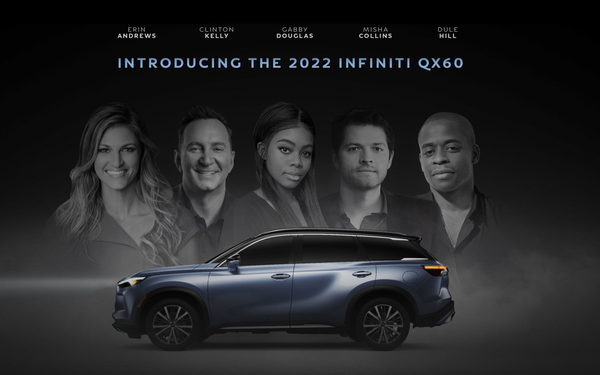 Infiniti is partnering with Cameo, an app connecting fans with thousands of pop culture personalities in the form of customized video messages.

The promotion is linked to the announcement that the automaker is taking orders for its 2022 QX60 via a reservation program. Reservations are available until the vehicle officially goes on sale in early fall starting at MSRP $46,850.

Infiniti says Cameo will provide consumers with an enhanced shopping experience including personalized discovery and FAQ. Consumers’ questions can be answered via personalized Cameo videos.

The QX60 is among one of Infiniti’s most significant product launches to-date, said Phil O’Connor, director of marketing communications, Infiniti Americas.

“We know our customers value meaningful experiences and believe this platform offers an engaging and informative way to interact with this star SUV,” O’Connor says in a statement.

QX60 customer “tend not to be auto enthusiasts,” O’Connor told WardsAuto. Consumers who are “incredibly busy” with children and careers will appreciate how the QX60 will fit into their lives, he says.

The automaker launched its marketing for the QX60 in June featuring Oscar-nominated actress Kate Hudson. The campaign’s tagline is “Conquer Life in Style.”

Infiniti is not the only brand to use the celebrity video platform. Progressive recently partnered with Cameo for a Father’s Day promotion.