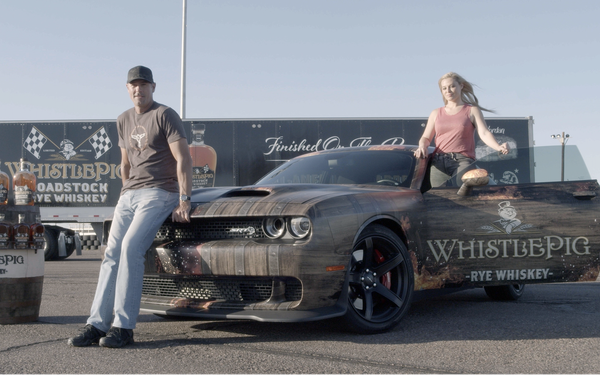 The road to WhistlePig’s new limited-edition RoadStock Rye Whiskey was, well -- a long one. It began this spring at the distiller’s Vermont farmhouse, where barrels of whiskey were loaded onto an 18-wheeler dubbed the Rolling Rickhouse for a 6,000-mile finishing journey to California and back.

“COVID was releasing its grip on travel and the world seemed ready to get back on the road,” WhistlePig Whiskey chief marketing officer Jason Newell told Marketing Daily. “We thought, if we could do it safely, we would jumpstart the return to normalcy with an All-American road trip.”

“The shake, rattle and roll of a cross-country road trip would ensure an incredible finish that could not be achieved any other way,” explained Megan Ireland, WhistlePig blender.

The final blended result: an 86-proof rye that “sings with a symphony of raspberry jam, brown sugar, and toasted cedar” and comes in a 750ml-bottle adorned with a custom rubber tire topper for a suggested $72.99.

Enough whiskey was produced so that most of WhistlePig’s retailers (located nationwide) could get a few cases, said Newell.

At the same time, WhistlePig worked with VP Racing Fuels to blend aged WhistlePig whiskey into a fuel for use in a custom RoadStock Dodge Hellcat. After two days of track testing by TV auto personalities Chris Jacobs (“Overhaulin’”) and Cristy Lee (“Garage Squad”) at Arizona’s Radford Racing School, Jacobs escorted the Rolling Rickhouse in the Roadstock Dodge Hellcat for the trip to Firestone.

Now, though the rye has been bottled, the Roadstock Dodge Hellcat will continue on, “making stops in key markets through the fall, complete with consumer sampling events,” WhistlePig said.

Newell noted that no outside agencies have been involved in the marketing: “We have a young and rebellious team with one singular focus: make the best whiskey in the world. If you are truly pushing the boundaries of innovation, marketing and creative are just an honest story of our journey to get there, and of course we always have a little fun along the way."

And in yet another example of WhistlePig globe-trotting, the distiller yesterday announced a collaboration with Ireland’s Limavady Irish Whiskey on what’s being called the world's first Single Barrel Irish Whiskey. WhistlePig will handle bottling and distribution.

WhistlePig said Limavady Single Barrel Irish Whiskey will be available as soon as August, with an SRP of $49.99 per 700ml bottle.