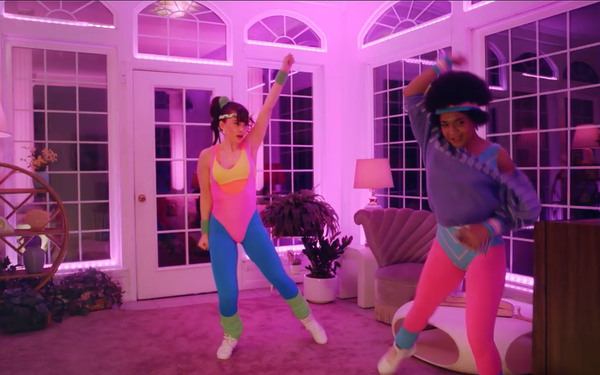 GE Lighting is rebranding its line of smart home products from C by GE to CYNC.

A rebranding campaign features three spots, running online and on social media, which take high-tech tools and place them in decades past, when the technology would have been well ahead of its time.

“Thief in the Night” takes place in the early 1900s. A farmer and his wife hear noises downstairs. The husband grabs his pitchfork and the wife grabs her smartphone to check the motion sensors and cameras. A chicken made its way inside the house, rummaging for food.

A 1950s husband gets a Hawaiian shirt as a birthday gift, but laments that it’s unwearable in the winter. His wife quickly cranks the heat up to 80 and activates an indoor smart plug to play Hawaiian music.

And “Aerobics,” takes place in the 1980s, complete with workout gear to rival Jane Fonda. One friend fires up a VHS workout tape while the other sets the mood via the CYNC app, controlling the ceiling fan and changing the color of the lighting.

The spots, directed by David Gaddie of The Colony,  each close with the tagline: “Back then, it would have been magical. Now, it’s just practical.”

Gian Carlo Lanfranco, CCO and Co-Founder of L&C, formerly known as Lanfranco & Cordova, and the agency behind the campaign, noted that two of the ads featured GE products of yesteryear, like a VCR and record player. “Consumers have a fond association with this brand, and the campaign plays off the trust people have in GE in an entertaining, relatable way,” said Lanfranco.

“This campaign concept provided a clever way to remind the audience of the long-time relationship with the GE brand while causing them to wonder how they ever lived without the CYNC smart home system,” added Rochelle Hartigan, Marketing Director, GE Lighting.