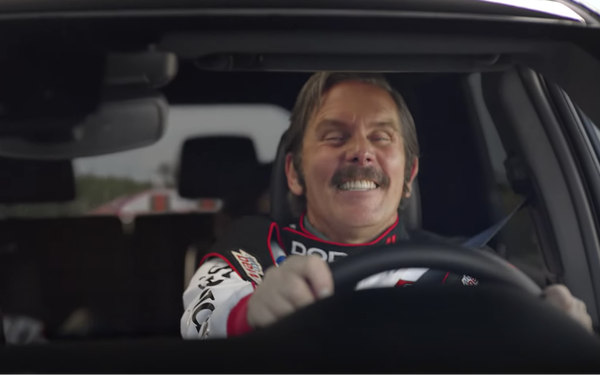 Stellantis’ Dodge brand is bringing back the characters of a popular comedic movie in a spot that also features a number of other brands.

"Life Lessons” from GSD&M takes another page from the 2006 film "Talladega Nights: The Ballad of Ricky Bobby.”

Breaking today, it features Gary Cole, reprising his role as Reese Bobby, who uses the road as his classroom with son Ricky Bobby and his pal Cal Naughton Jr.

The spot, aiming to echo the product placements in the movie, features brands from the film including MTN DEW, Wonder Bread, Old Spice and Applebee’s.

Sony Music Entertainment and AC/DC provide the video's music soundtrack with "Shot in the Dark,” originally released in the Dodge brand’s “Family Motto” campaign, which debuted last October in celebration of a J.D. Power award win.

Today's spot is authentic because it not only uses characters from the movie, but a moment from the storyline, he says.

“Authenticity is in the details,” Francois says. “That’s why we wanted the brands that were in the movie to also be in our commercial. So we reached out to each of them to get their permission.”

The 30-second spot will run on TV while a 60-second version and shorter forms will be featured on digital.

Reese tosses words of wisdom toward the boys, including “Life takes 50% bravery and 60% stupidity;” “Take it from your daddy. Just because you grow up, doesn’t mean you need to give up!” and “The most powerful force in the universe is love. Ha, ha, ha, no, it’s not! It’s hot, nasty, badass speed!”