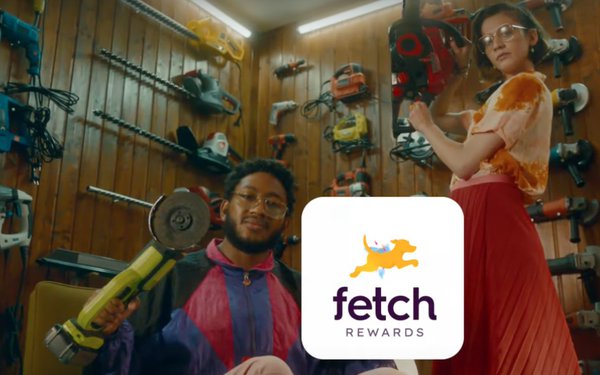 It’s called “Get Receipt Rich!” and is running across digital media, television and out-of-home advertising in four markets.

When Fetch members scan retail receipts, they receive points that can be redeemed in the form of gift cards. Members can also earn points by referring others who sign up and scan at least one receipt—a process that also unlocks bonus points for the new members.

Brands cover the points Fetch awards to users while also paying to use the platform.

In this spot from the Anomaly agency, a young couple is surrounded by things with which they’re obsessed—in this case power tools—but use them in “innovative yet inefficient” ways. Powering a toothbrush with an electric drill and cutting a cake with a buzz saw are but two examples.

In another commercial, a woman binges on restaurant-delivered ribs, then scans receipts “to fuel her real obsession.”

The campaign was born out of an insight that people deserve to be rewarded and can turn trash—store receipts—into cash, according to Fetch CMO Birk Cooper.

“Get receipt rich is an attitude. We like to say it’s a lifestyle—not a tax bracket,” Cooper tells Marketing Daily.

Founded in 2014, Fetch says it has processed roughly one billion receipts and awarded shoppers more than $120 million in points.

The company’s first major ad campaign expands upon its direct buys on social media and other digital platforms—along with the use of influencers.

“Everything we’ve done has been performance-driven media,” says Cooper. “We realized that with our growth goals and what we want to achieve, we need to start driving household awareness right now.”

He describes the campaign’s target audience as “everyday go-getters” and “your classic head-of-household shopper” in the 25-54 age cohort.

Media is being handled by Noble People and includes OOH in Chicago, Dallas, Madison WI and Pittsburgh.

“When we looked at our strategy, out of home presented itself as a ripe opportunity,” says Cooper. “There’s not a ton of apps that do it and do it super well. We wanted to test local markets to see if this is a component that we can scale up as well.”