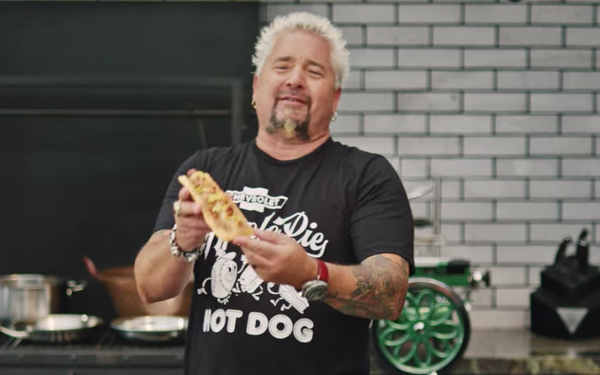 Chevrolet is partnering with celebrity chef Guy Fieri to create what they are calling “the ultimate ballpark snack – the Apple Pie Hot Dog.”

The Apple Pie Hot Dog is inspired by a notable Chevrolet television ad from 1975. The ad’s jingle asserted “baseball, hot dogs, apple pie and Chevrolet go together in the good old U.S.A.”

Chevy enlisted Fieri, the mayor of a made-up land called Flavortown, to lead the development and creation of the recipe.

Fieri shows how to make the item in a 52-second video which is being promoted on social media. A 36-second video released on Saturday teased the announcement.

It will be offered exclusively to attendees at the MLB at Field of Dreams Presented by GEICO in Dyersville, Iowa, on Aug. 12.

Chevrolet has long been a supporter of all forms of baseball, from the major leagues to community teams, said Steve Majoros, vice president, Chevrolet marketing.

The food item will help the automaker “celebrate and connect” with fans at a “uniquely American event,” Majoros says.

Inspired by the 1989 Universal Pictures movie of the same name, the MLB at Field of Dreams Game marks the first Major League game ever held in the state of Iowa.

The game will be played at a temporary ballpark built adjacent to the movie site in Dyersville, at 7 p.m. ET on Thursday, Aug. 12, and will be nationally broadcast on FOX.