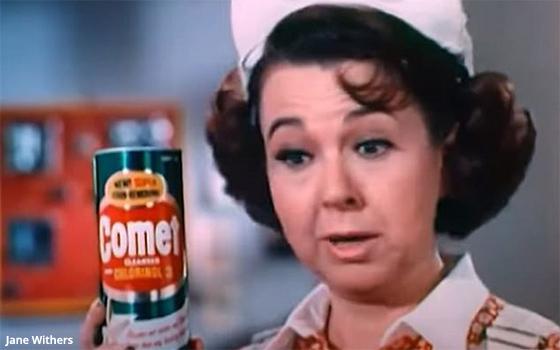 I once met the Maytag repairman and he was not lonely.

He was in the company of two friends in a hotel hospitality suite at the 1987 National Association of Broadcasters radio convention in Anaheim.

To visually make a point about the benefits of playing a TV commercial character, the Maytag repairman -- in real life, actor Jesse White -- literally showed me the money.

I was reminded of this encounter last week when news circulated about the death of Jane Withers at the age of 95.

She had once been a child star in the era of Shirley Temple, but to a generation of Baby Boomers raised on television in the 1960s and ’70s, she was Josephine the Plumber in commercials for Comet cleanser.

Josephine (pictured above) was one of a handful of unforgettable commercial characters from that era.

Others who come to mind are Madge the Palmolive lady, the beauty salon manicurist (“You’re soaking in it!”) played by Jan Miner; Mr. Whipple -- played by Dick Wilson -- the grocery store manager who could not resist squeezing the Charmin; and the original Maytag repairman, officially named Ol’ Lonely, played by Jesse White for 21 years, 1967-88.

The reasons why these characters and so many of the TV commercials and slogans of the pre-cable TV era were so memorable are more or less self-evident and often noted.

With no other choice but three broadcast channels to watch, the commercials seen in those decades were seen by audiences in the many tens of millions.

Those of us who are old enough to have been among those millions can easily recall the commercials and slogans of our youth. Slogans such as “Winston tastes good like a cigarette should” and “Please don't squeeze the Charmin” are permanently embedded in our brains.

When I met Jesse White, he was 70 and (unbeknownst to me) nearing the end of his run as Ol’ Lonely. We were introduced to each other by Gary Owens -- L.A. radio personality, voice artist on commercials and cartoons, and a man known to a generation of TV viewers as the “beautiful downtown Burbank” announcer from “Rowan & Martin's Laugh-In” -- with whom I was acquainted./p>

At first, my conversation with the Maytag repairman focused on his earlier career as a character actor in movies and TV shows.

Our conversation eventually turned to his long association with Maytag. In light of all the movies and TV shows we had just been talking about, I asked him why he stayed in the Maytag repairman role for so many years.

He answered my question by suddenly and dramatically plunging his hand into one of his pants pockets and then pulling out a wad of one-, five-, 10- and 20-dollar bills that was so thick he could not close his fingers around it. “This is why!” he said, displaying this rolled-up wad of money and grinning demonically.

Hopefully, Jane Withers, the child movie star from the 1930s who became Josephine the Plumber in the 1960s, was compensated just as handsomely.

Jesse White died in January 1997 at the age of 80. His last role was on “Seinfeld” in February 1996 in the episode titled “The Cadillac.” White played a condo board member who helped impeach Jerry’s father as condo president.