Acne Insecurity Gets Visible Again As People Venture Out 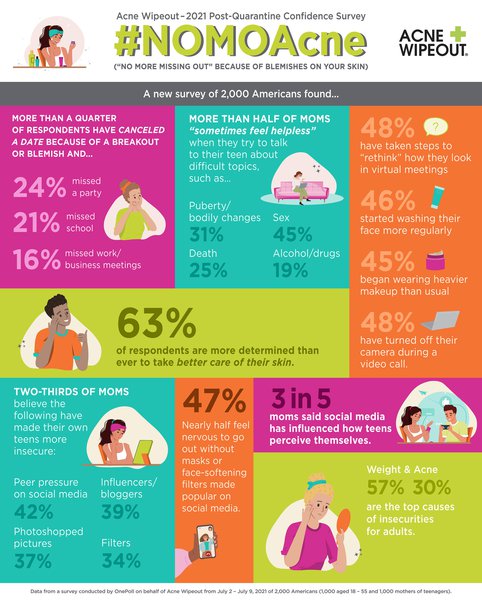 With people reconnecting in person again, lack of self-confidence due to acne is reasserting itself.

On Wednesday, University Medical, which launched Acne Wipeout products late in 2020 and began distributing them nationally this May, released results of a survey finding acne falling behind only weight as the biggest cause of insecurity right now among both teens (38% acne, 40% weight) and adults (30% acne, 57% weight).

Of course the company has a vested interest in such findings. And the research came on the same day that Global Market Insights (GMI) projected that the global topical acne medication market, of which Acne Wipeout is a player, will surpass $8.6 billion by 2027.

Growth drivers for the market, GMI said, include a “rising concern for facial aesthetics.”

Acne Wipeout's study of 2,000 people by OnePoll, conducted between July 2 and July 9, found that even before the pandemic, 26% of Americans had canceled dates because of a blemish or breakout on their skin, 21% had missed school, and 20% had skipped hanging out with friends.

Also, 47% of respondents now feel nervous about going back out in the “real world” without masks (presumably to hide faces) or social media filters (to improve their looks digitally). Meanwhile, 48% have taken steps to "rethink" how they look in virtual meetings, including washing their face more frequently (46%) and wearing heavier makeup than usual (45%); 48% have turned off their cameras during video calls because they feel insecure about their appearance; and 33% feel less confident since the pandemic started.

"The study reveals that acne is a top cause of self-doubt and missing out on life among today's teens and adults," said Matt Stevens, vice president at University Medical and one of the creators of Acne Wipeout. "We are in this important transition period when we are all trying to get back to life and our old routines, but for many, confidence levels take a hit when we're no longer behind masks and virtual filters.”

University Medical, of course, says that Acne Wipeout , an OTC product that  combines benzoyl peroxide and a retinoid, will help to combat the problem.

It’s now being sold online on AcneWipeout.com and Amazon, and both online and in-store from Walmart, with marketing consisting of influencer engagement, social and digital campaigns, and PR.

The team behind Acne Wipeout was also involved in the creation of Valeant’s AcneFree line, which was sold to L’Oreal in 2017. Other key players in the category include Neutrogena, Differin and direct-to-consumer giant Proactiv.