New Hulu Drama Is Tailor-made For An Anxious Age 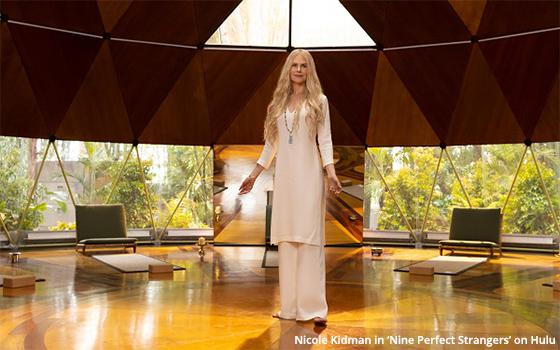 The wellness-spa concept gets taken to unpredictable extremes in “Nine Perfect Strangers,” a new Hulu drama series streaming this week that seems tailor-made for our current age of anxiety.

The title can be taken several ways. Certainly, the nine people who have somehow dragged their emotionally damaged selves to this far-off-the-beaten-path wellness facility called Tranquillum are far from perfect.

This eight-part series has this group of people checking into Tranquillum House to treat a variety of First World problems. Some have to do with processing grief, while others involve coping with career reversals and moving on from busted relationships.

The nine represent different types of people too, including a bestselling author (played by Melissa McCarthy), a high school teacher (Michael Shannon) who comes with his wife (Asher Keddie) and their 20-year-old daughter (Grace Van Patten), a wealthy young African-American man (Melvin Gregg) in a yellow Lamborghini who is accompanied by his social media-addicted wife (Samara Weaving), a temperamental Baby Boomer (Bobby Cannavale) who drives a vintage Mustang, a stay-at-home mom (Regina Hall) and an Englishman (Luke Evans) who appears to be confused about his sexuality.

The first episode of “Nine Perfect Strangers,” which is adapted from a best-selling novel of the same name by Liane Moriarty, very effectively sets the scene and defines the characters.

What they are about to experience, however, remains a mystery at the conclusion of Episode One, although the otherworldly hostess/manager of this facility -- a Russian émigré named Masha (played by series star Nicole Kidman, pictured above) -- gives various oblique hints that the program these strangers have signed up for will be rigorous indeed.

None of the issues these people are dealing with have anything to do with our real-world preoccupations with COVID-19, divisive politics, turmoil and unrest both domestic and foreign, and other issues that fill our thoughts and news media.

And yet, this show feels very of the moment because the anxieties and stresses it covers are relatable to so many. We live in an anxious age. If it was not COVID and climate change, it would be something else.

This show’s message seems to be: Transformation is hard, and might require drastic action.

Not for nothing, but on this show, the transformation begins with something that would seem to be deceptively simple, yet very difficult for most of us -- giving up your cell phone.

digital, health and fitness, hulu, streaming, television
1 comment about "New Hulu Drama Is Tailor-made For An Anxious Age".
Check to receive email when comments are posted.
Next story loading