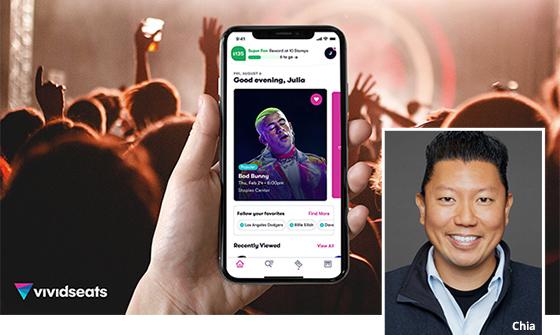 Here at MediaPost, we have known of Vivid Seats for years. Leaders of the live event ticket marketplace’s ace CRM and performance marketing team have been invaluable contributors to many of our Email and Search and Performance Insider Summits.

Consumers, on the other hand, are much less aware of the brand. As CEO Stan Chia tells us this week, Vivid Seats is a 20-year-old, profitable company that still has a minuscule mind share against higher profile rivals StubHub and Ticketmaster.

And so, Chia positions the company’s big awareness push as more of a brand launch than a “relaunch.” But in a highly commoditized segment where price and convenience drive sales, you have to get creative about building unique consumer experiences and value in order to differentiate itself. You can listen to the entire podcast at this link.

MediaPost: What is the current state of demand among consumers for live events?

Stan Chia: This past weekend in Chicago, Lollapalooza had over 100,000 people there. You've heard commentary from the industry about festivals like Austin City Limits, Bonnaroo selling out faster than they've ever sold out before. We also see, for example, people buying more tickets per order than they have before.

So perhaps [people are] getting together with more people than they have [previously], as they've kind of missed that intimacy of being with friends and also just experiencing it live. We've seen the percentage of ticket orders with four plus tickets go up and we see folks willing to travel more than they have in the past to get to events. We've seen them traveling on average about 23% further than they have historically.

MP: So you guys are coming into this post-pandemic period with a major rebranding effort. Why rebrand now?

Chia: It was one of the reasons that I joined Vivid Seats in late 2018. Prior to my arrival, Vivid Seats had less than 5% unaided awareness when you asked people about ticketing. Compare that to Ticketmaster with 80%, or Stubhub was 60%. We had growth, scale, profitability,
but very little brand awareness.

It's almost not a rebrand because we had such little awareness, but a brand launch and visual identity. More importantly, [it] centers around the value that we could provide to consumers and sellers. Again, we are a marketplace on both sides. That's what drove a lot of the thinking here for us.

MP: So in a highly commoditized market, how do you characterize Vivid Seats as a brand?

Chia: We are really all about delivering exceptional value. We've launched a new consumer app really focused on personalization, user experience. We also launched the industry's first loyalty program, Vivid Seats Rewards, in August of 2019, tied into our app. We saw our app usage go from single digits of our volume to over 40% of our volume in the six months that we had it launched before the pandemic hit. 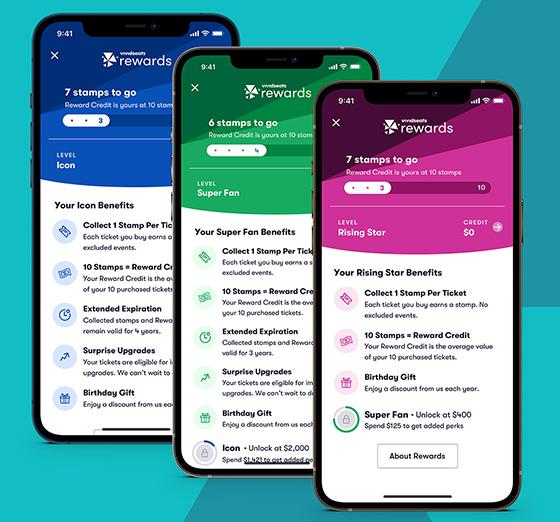 MP: The things you're describing all have a lot to do with partnerships and product mix, a lot of subtle things about the experience.

Chia: I think it comes from really just a central tenet of, “it all starts and ends with the customer.” Our customer service is the best in the industry. We're really proud of that.

We look at, again, exceptional value and how that's defined. The loyalty program, which we enhanced as part of our brand launch with free tickets for every fan, is kind of how we think about this. Outside of spending advertising dollars, this is real, tangible value for fans. Every fan earns 10% and value on every single ticket that they buy from Vivid Seats.

We've launched tiers of our loyalty program. We're looking for additive things that really elevate the experience for them. Our inaugural “Surprise and Delight Event” was held during Lollapalooza at an exclusive after party which we co-hosted with Rolling Stone. We invited only two members of our loyalty program. They came and saw an intimate performance with Roddy Ricch. Chance the Rapper happened to be there, Marshmallow happened to be there, so just a great exclusive event for our loyalty members.

In the very near future is a rollout where our loyalty members are going to be able to earn DraftKings dollars. So it starts and ends with the customer. We really built features and added partnerships and components to the loyalty program, whether that's in perks or just financial value, that we think customers really want and need.

MP: What's the media plan behind the rebrand? How are you balancing brand and performance?

Chia: As you know from the history, we've been largely performance-marketing focused. We are very proud of our capabilities there. It's all in-house. We've built our own platforms to use our own first-party data. I think we have very, very strong advantages when it comes to how we think about performance marketing. I think as we bring in brands, certainly there will be an opportunity for us to really diversify our mix when we think about the mix and really moving  differently in the funnel.

I think what we're certainly  aspiring to do as we launched the brand is twofold. One, move up in the funnel. And there are multiple channels. But secondly, If we're so strong with performance marketing without any brand awareness, I think the addition of this can only add a halo to that that would drive nice efficacy through those performance channels, in addition to our incremental diversification into the other channel types.

MP: You're buying media in a very hot digital space where prices were driven up infamously by waves of VC-funded D2Cs. But you're profitable. How do you manage customer acquisition costs?

Chia: We have wonderful performance-marketing platforms. We've also built in-house a lot of our data capabilities. So intriguingly you might find it a differentiator here that for us on a customer acquisition basis, even with minimal brand awareness, we're already first-transaction profitable.

So we're not actually in that world of saying,  hey look, I'm happy to burn gobs and gobs and gobs of money away to try to get customers in. And you could say, I'll wait till I get to scale and then extract value when I'm there from increased frequency, etc. We're actually at the point. I go back to over $2 billion in top line, over 100 million dollars of EBITDA, first-transaction profitability. So for us, we don't have to prove that we've got a profitable, scalable sustainable model. We've already got that.

MP: Where are you seeing the most performance? Search, social, display, affiliates -- what's driving it?

Chia: I think today, we certainly see a lot of that in search. I mean, on all of the other digital channels we see a fair amount to search. Social -- we spend there, but, again, almost as you'd expect without having invested much in brand before, probably a channel that hasn't historically performed as you'd expect it to.

I think as we invest in brand you can expect our diversification of channels, even on the performance front and our aggressiveness there, really spike up as in when we see returns for the brand investment.

MP: Can the market sustain this many ticketing brands? Is there a shakeout or a consolidation that's inevitable here?

Chia: We're in the process of going public. We've got an investor deck out there that shows the competitive landscape. The competitive landscape in 2019, and call it secondary ticketing, was about $11 billion  and of that you've got three players who are scaled and profitable [Stubhub, Vivid Seats, Ticketmaster].

You've got the three players there. Out of the 11, those three encapsulated in between nine-and-a-half and 10, and then the remaining are a bunch of niche players who are trying to figure out if they can break into the market. All money-losing, all sub-scale players.

And then you look at the three scale players. In 2019 I think Stubhub, for all intents and purposes, has disclosed their North American business was shrinking. Us, with some investments but without really having driven a lot of the brand investments yet, still growing that year. And Ticketmaster disclosing that their secondary business in ‘19 was flat.

So as we look at the space, could there be shakeout, could there be consolidation? I think, certainly, there's always that opportunity when you look at a broad tail of unproven, un-scaled models. But I think when you look at where we are versus the entirety of the landscape, I feel confident, I feel proud about where we are and, certainly, our prospects moving forward.

MP: Strictly from a digital marketing perspective, which you rely on, what are going to be the biggest challenges to pull off this plan?

Chia: On the performance channels, I think for us and for everybody, I think the cost structure matters. I mean to a certain extent, yes, if you're willing to continue to lose money and throw it away, I think that's always a dangerous competitor to be up against. For us, I think the benefit and the strength here is that being extremely aggressive and well versed and technologically sophisticated in that way has been an advantage for us without a brand.

We combine that in a model that's already spitting off cash and profit. As we layer in brand, I think it's on us to make sure that we are diligent and thorough in managing that mix, both from a mix percentage perspective as we diversify channels, but also the rate at which we introduced that diversification.

We want to be disciplined. We want to be structured in terms of how we approach it. And we're also pleased with an opportunity, I think almost a once-in-a-lifetime opportunity: We come out of a year where everybody was isolated, again, kind of timed well with an opportune moment for us to launch a brand that resonates, I think, with experiencing it live.