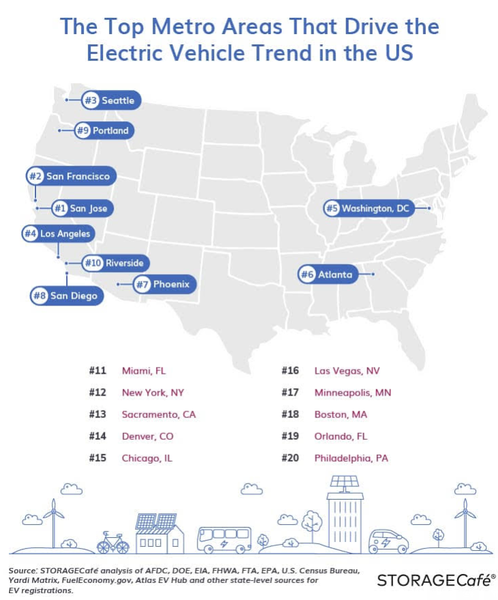 I chatted over the weekend with several Tesla owners, including one who went on and on about how much she loves her vehicle. She urged me to check out the engaging factory tour offered by Tesla.

Not surprising, she’s a Californian and lives near Los Angeles.

The greater Los Angeles area took the first spot for electric car adoption, with the highest number of registered EVs (more than 230,000), according to research from StorageCafe on the best-equipped metro areas for electric vehicles. The San Francisco metro area takes the second spot, with about 122,000 EVs.

San Jose, San Francisco and Seattle metropolitan areas took the first three spots overall. For renters of apartment units in buildings equipped with charging stations, the San Jose and Sarasota metropolitan areas are the best spots, with 12.3% and 9.1%, respectively. Of the top 10 best-equipped metro areas for EVs, five are in California.

Researchers analyzed the 100 largest metro areas based on 14 key metrics, including the number of registered electric vehicles, EV infrastructure, the cost of an eGallon and others listed in the report.

San Jose is the ultimate electric car hotspot, according to StorageCafe. The metro area has the most EV public charging stations per 1,000 households (2.4), as well as the most apartment units (12.3%) in rental buildings fitted with charging stations. San Jose also claims the third-highest number of EVs in the country (approx. 74,000 electric cars).

Adoption is a non-linear process. It starts slow, but once it reaches a certain stage, it will happen very quickly, says Deepak Rajagopal, associate professor at the Institute of the Environment and Sustainability at the University of California, Los Angeles.

“We are close to that point in many markets (cities and vehicle segments), but a little behind in others, with the trend heading in that direction for sure,” he says. “Public policy needs to focus on providing good information in an accessible and targeted manner to different consumer needs and helping create a convenient and reliable and affordable charging infrastructure.”

Back to that Tesla factory tour. What are the chances that Elon Musk would allow a journalist to check it out? I’m not holding my breath.