SunChips Promotes Individuality With 'Be Your Own Wave' Campaign 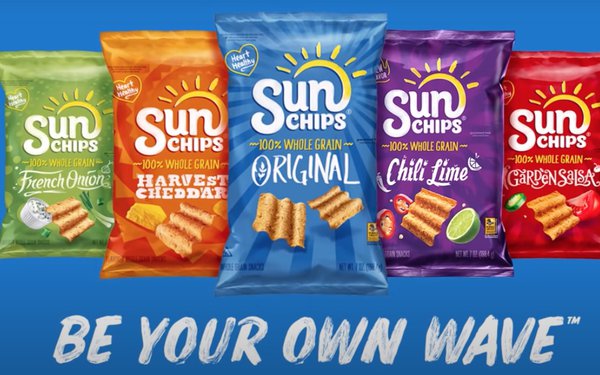 The first campaign for SunChips in four years is an effort aimed at rejuvenating a brand that’s been around for more than three decades.

“Be Your Own Wave” is a play on the whole-grain snack’s unique, curvy shape and a call to action for younger consumers to embrace their individuality.

Consumer research into all aspects of SunChips and how consumers relate to the venerable brand provided insights from which the campaign concept evolved, according to Ciara Dilley, vice president of marketing at Frito-Lay North America.

“Design-led thinking is critical for this brand,” Dilley tells Marketing Daily. “When we had done all the visual work, only then did we go to our agency and say ‘now bring us a campaign.’ Once we got that far, it wasn’t hard.”

The first iteration of “Be Your Own Wave” focuses on artists partly because “they’ve had a really hard time during COVID,” says Dilley. As the campaign progresses, “We can see how we can start to bring even more and more real-life consumers into this idea.”

The campaign for now uses only digital media.

“We have used audio quite a bit on SunChips in the past and we plan to use it in the future as well,” Dilley adds. “Whether that’s streaming or podcasting, we’ve done a lot of work in that area and I think we will evolve the campaign to incorporate those as well.”

In line with Frito-Lay’s commitment diversity, SunChips chose to work with ELEANOR, the country’s only production company reportedly founded by a Black female, and choreographer/director/LGBTQ advocate Ezra Hurwitz.

“We want to show people that you can get fabulous talent in the marketplace that have diversity at the heart of who they are,” Dilley says.