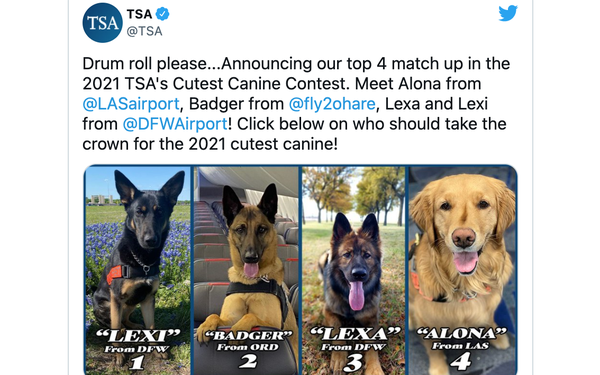 The Transportation Security Administration is showing its lighter side, taking to social media to ask for the public’s input in choosing the 2021 TSA Cutest Canine.

The finalists were selected by TSA employees nationwide via internal voting and the public now has the opportunity to vote and crown TSA’s cutest canine for 2021. Anyone can vote on the federal agency's social media platforms that include Twitter, Facebook, Instagram and LinkedIn.

Voting ends Aug. 19 at midnight and the winner will be announced on National Dog Day, Aug. 26, via social media platforms.

Passengers departing airports across the country can expect to see Passenger Screening Canine teams working around travelers. The teams navigate among large groups of people to pinpoint the source of an explosive odor, even if the source is mobile and often without the source being aware it is being tracked. A PSC handler is trained to read its dog’s change of behavior when it indicates an explosive scent has been detected.

Currently, the federal agency, a unit of the Department of Homeland Security, has trained more than 1,000 PSC teams that work primarily at airports across the country. These teams are also trained to work in non-aviation transportation venues.

While PSCs are sociable (and cute, thus the contest,) the TSA asks the public to remember that they are working dogs.