Celebrity Antics On 'Ellen' Morph Into Game Show For NBC 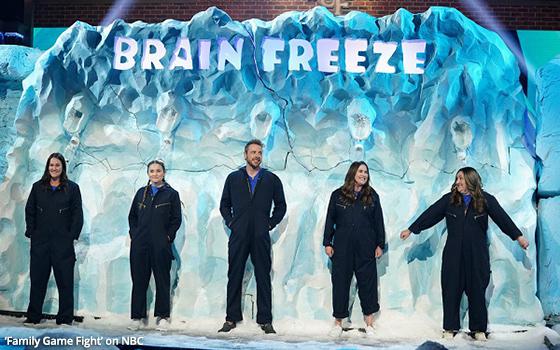 A new one-hour family competition show on NBC might be the first show in television history that has been adapted from somebody’s “antics.”

Let me please explain. The show is called “Family Game Fight!” and it is co-hosted by the married-to-each-other twosome of Dax Shepard, 46, and Kristen Bell, 41.

On the show, which debuted August 8 following NBC’s coverage of the closing ceremonies at the Tokyo Olympics, Bell and Shepard (seen in one of the show segments in the photo above) each join forces with a different team of non-celebrity contestants who are grouped together to represent a family, whether they are in fact related or not.

These contestant teams and their celebrity team member then engage in a series of high-spirited zany competitions, at the end of which one of the family groups will share a cash prize of $100,000.

According to the press material provided by NBC on the proprietary web site it maintains for journalists on the TV beat, " 'Family Game Fight!' is inspired by the couple’s competitive antics on ‘The Ellen DeGeneres Show’.”

The press material also notes that “Family Game Fight!” represents “the first time Bell and Shepard have paired up for a television project” -- as if by watching this show we are all to witness a milestone in show business history (no offense to the happy couple).

As one who has never personally observed the “antics” of Dax Shepard and Kristen Bell as seen on “The Ellen DeGeneres Show,” I have no idea how these antics metamorphosed into this prime-time TV show.

But these “antics” apparently had enough potential that an entire TV show has sprung from them, along with another revenue source for Ellen DeGeneres, who is credited as one of the executive producers of “Family Game Fight!” probably for the sole reason that it was on her show that this show’s foundational “antics” were first nurtured.

It is as if some sort of brainstorming meeting was held at NBC in which the company’s development team was tasked to search the television universe for some sort of TV-worthy “antics” that the network could make into a TV show -- pronto!

Then, or some time later, an enterprising member of that development team proposed that the “antics” of Dax Shepard and Kristen Bell, that he or she once saw on “The Ellen DeGeneres Show” one weekday afternoon (possibly while out sick on a sick day), be developed into a prime-time game show.

Not only did the show get made, but it is believed that this very same executive was promoted immediately into the newly created position of Vice President of Celebrity Antics and Development.

As for the show itself, “Family Game Fight!” is a lively hour of competitive antics not only on the part of Shepard and Bell, but also the non-celebrities who the celebrity co-hosts are there to motivate and energize.

However, the only way for any of the non-celebrity contestants on the show to profit from the show is by winning the show’s prize money.

Unfortunately, for these non-celebrities, any antics they engage in on the show -- especially those antics that have the potential to be exploited and expanded into future antic-based TV series -- immediately become the intellectual property of NBC.

This column was previously published in Television News Daily on August 6, 2021.