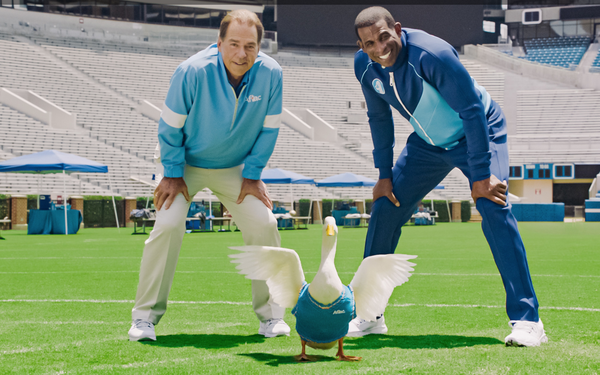 “We thought long and hard about, ‘where do we take the storyline?’ And it’s really about cementing Saban’s legacy for winning, and having him extend that legacy to someone who could build upon the Aflac program,” said Shannon Watkins, chief brand and marketing officer of Aflac.

The campaign focuses on how to take action against medical debt and plays off Saban’s blue Aflac blazer.

The coat, which has been in at least one commercial per year for the past three years, was dubbed the “Aflacket” by fans and viewers who took to social media to express a desire for their own. This campaign is centered around Coach Prime earning his Aflacket as he learns what it means to be part of team Aflac.

The first spot, “Ready for Prime Time,” debuts Aug. 28; the second, “What it Takes,” airs Sept. 4. The third spot, “Jacket Fitting,” will premiere later in the year as conference championship season begins.

While Aflac has long celebrated the college football experience, college football is at a pivotal moment in history, with many mobilizing to celebrate the role of historically black colleges and universities, according to the company.

“The Aflac Flockwave and the Incomparable Tailfeathers” is the HBCU band featured in the TVC spots, made up of actual HBCU musicians and dancers, culled down from more than 2,000 who auditioned.

Black representation and the use of authentic HBCU talent are just some of the ways in which Aflac’s commitment to supporting HBCUs and communities of color extends beyond its product offerings and into its marketing legacy, according to the company.

Diversity was prioritized both in front of the camera and behind it, from the team of agency partners to the female director, J.J. Adler (Ruckus Films).

The campaign will air on ESPN/ABC, the ACC Network, the SEC on CBS, and others, with off-air touch points including social media, events, and activations throughout the college football season.