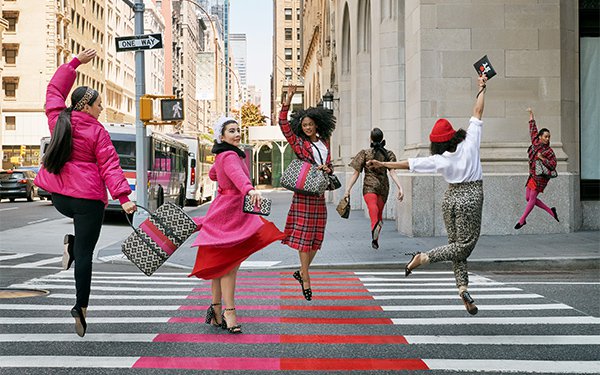 New York Stars in fall campaigns For Kate Spade, Tory Burch, Uniqlo as the city preps for the return of the real-live New York Fashion Week. Brands know how hungry people are for that Big Apple energy.

All are rolling out campaigns that make more of a fuss about the city than they do about the clothes. The dreaded Delta variant may be threatening to rain on America’s reopening parade, but you’d never know it from Kate Spade New York’s high-energy kickoff. It wants people jumping for joy and spotlights New York dancers in colorful crosswalks.

Plus, it’s orchestrating a TikTok dance challenge to go with it. The fashion brand, owned by Tapestry, says this effort is the next pirouette in its ongoing love letter to New York.

Set to “Downtown,” a group of dancers show off the newest looks from its Spade Flower Jacquard collection. The graphic black-and-cream print clothes are accented with red-and-pink color-block stripes. The brand hopes the campaign, which includes video, out-of-home advertising placements and social media, serves to celebrate the jubilation of re-opening, along with a nod to the moxie that’s helped so many make it through a grueling 18 months.

Part of the effort includes an additional $75,000 donation for the National Council for Mental Well-Being to support mental-health first-aid training and mental-health education workshops within New York’s artistic community.

“This season, we’re falling in love with our city all over again,” says Jenny Campbell, Kate Spade’s CMO, in its announcement. “We are rediscovering what we love about our city while celebrating the resilience of NYC and encouraging others to do the same in their own hometowns.”

Two dancers featured in the ads — Kelli Erdmann (@happykelli) and Alex Wong (@alexdwong) — spearhead the TikTok challenge, each taking their followers to favorite spots in the city.

Tory Burch, which just opened a new multi-level flagship store on Mercer Street, is teasing its own NYC love letter, this one in the form of a film by Daniel Arnold. “You gotta be strong-willed,” says one gritty New Yorker. “And never give up.”

“There’s a chicness to Soho,” one of the spots begins. “It’s a little bit street, a little bit sophisticated.” Ads are running digitally, as well as on Instagram.