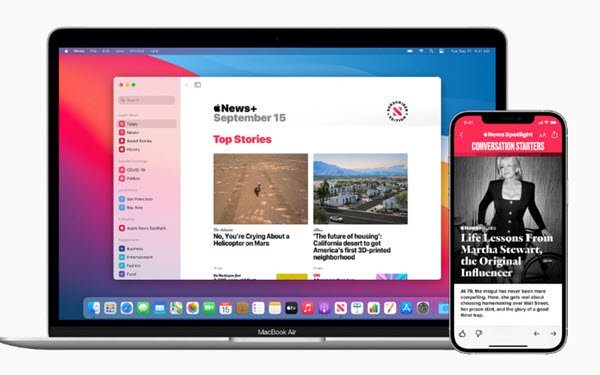 Publishers have long complained about giving Apple a 30% cut of first-year subscriptions generated through their apps in the App Store in order to participate in Apple News, as well as questioned whether the benefits are worth the trade-offs.

Still, many have been unwilling to forgo the ability to reach the 125 million monthly active users of the news feature, which is pre-installed on iPhones.

Under heightened antitrust scrutiny from lawmakers and regulators, as well as an ongoing antitrust lawsuit with Epic Games, Apple last November cut its first-year subscription commission to 15% for small businesses -- including smaller publishers -- that net less than $1 million in total annual app sales, and for developers new to Apple News. (The commission on second year and beyond subscriptions has always been 15%.)

But larger publishers have remained dissatisfied with Apple News terms and other Apple policies.

In fact, after the small-businesses commission program was announced, Digital Content Next (DCN), a trade group comprising large publishers including The New York Times, AP, Meredith, ESPN and NBCU, among others — joined Coalition for App Fairness (CAF), points out TechCrunch.

These publishers had already written to Apple CEO Tim cook to demand lower commissions, and they also didn’t want to be required to use Apple’s services for in-app purchases for their subscriptions, contending that the “Apple tax” forces them to raise subscription prices.

Now — in a move that also coincides with Apple’s just-announced, $100-million settlement of an antitrust lawsuit brought by developers — Apple is offering all publishers the 15% commission rate on first-year subscriptions… if they’re willing to agree to participate in a new Apple News Partner Program that has some advantages for Apple, and potential disadvantages for publishers.

The program requires publishers to provide all of their content to Apple it its preferred Apple News Format (ANF) — not an obstacle for publishers that have already set up systems or added plug-ins to translate their content for distribution on Apple News.

Participants must deliver “original, professionally authored” news content, and maintain a “robust” Apple News channel in the markets where the service is available: the U.S., Canada, U.K. and Australia. Those located outside of those markets can provide Apple with an RSS feed.

And in the App Store, publishers must offer auto-renew subscriptions through Apple’s in-app purchase system.

As TechCrunch notes, it remains to be seen whether larger publishers will opt to participate in the new program, given that it fails to address their broader complaints about the platform and its rules, and serves to help lock them into Apple’s ecosystem.

While Apple lets publishers paywall their content and keep all of the revenue from ads they sell through Apple News (or give Apple 30% to sells ads for them), some publishers are already worried about ceding too much control to participate in Apple News, the report points out.

The partner program “serves as a way to push news organizations to continue to participate in the Apple News ecosystem, as it will make more financial sense to do so across their broader business,” it adds.

Some publishers who participate in the separate Apple News+ subscription service — which offers access to a variety of publications’ content for a set fee (lifestyle magazines are more heavily represented than news publishers) — have reportedly been pleased with the incremental revenue being generated by reaching a huge universe of potential prospects without having to make large marketing investments.

However, Apple has always been known for stinting on sharing audience and customer information with “partners”, and has been known to drop heavily promoted programs that ultimately don’t meet its expectations, with little regard for partners that made significant investments to participate.

Magazine publishers are still doing business with Apple, but some have not forgotten the money they lost a decade ago on investing in creating digital issue apps for iPads, only to have Apple ultimately withdraw its support of those offerings.